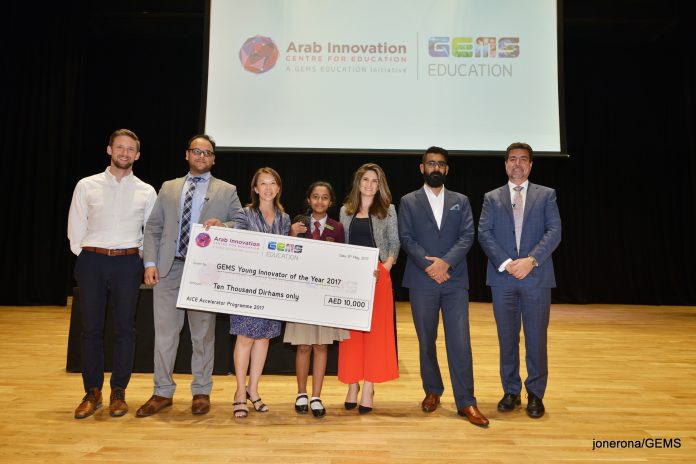 Over 200 of the brightest minds from across the GEMS Education network were honoured at the GEMS Innovation Awards ceremony on 8 May 2017.

The Global Innovation Challenge took place earlier this year where students from around the world were invited to submit prototypes using future-focused technologies such as 3D printing, robotics and nanotechnology. The students were announced winners across different categories such as Disaster Resilience, Environment, Energy, Food, Health, Learning, Security, Prosperity, Governance, Space, Shelter and Water.

The top three winners of the Challenge will have the opportunity to present their projects at the Singularity University Global Summit in Silicon Valley, California between 13 and 15 August 2017.

The three winning teams were PowerShoe from GEMS Millennium School Sharjah, ALID from GEMS Our Own English High School – Dubai and Pentagon from Our Own English High School – Sharjah, Boys’ Branch. PowerShoe is a modified shoe that generates electricity by walking and can charge your mobile phone in just 500 steps. ALID, installed in a car’s steering wheel, uses infrared and iris scanning technology to detect the driver’s blood alcohol level and does not turn on the ignition if detected above a set limit. Pentagon uses automated 3D printing to create inexpensive, interconnected housing for refugees.

Dino Varkey, Chief Executive Officer, GEMS Education, said: “The future is advancing at an exponential rate. As the leading educator in the region, it is critical that we equip our students with the necessary skills as this generation truly has the potential to change the world.

“The awards have provided a platform for our students to think outside the box and undertake projects that can positively impact lives, communities and the society by addressing our most pressing challenges. These awards are a testament of the talent and skills that our students possess. I would like to congratulate all the participants and winners for their achievement and efforts,” added Dino.

The AICE Accelerator Programme held over March and April provided students with financial and non-financial support and mentoring to build customer and growth oriented business plans around their products. The programme culminated in the AICE Demo Day, where each team pitched to the region’s leading technology venture capital firms and investors.

Mythri Muralikannan, a grade seven student at The Millennium School, Dubai was declared the GEMS Young Innovator of the Year for spearheading the technology-driven idea of improving safety in school buses by installing 3-D motion sensors that detect movement once the engine is switched off and doors are locked. Her prototype has been presented to the Road and Transport Authority (RTA) and School Transport Services (STS) who have agreed to pilot her technology in their buses.

Mythri received AED 10,000 as cash prize along with 10 hours to use on the TeachMeNow online tutoring platform and 12 months of continuous support from GEMS Education and the network/partners to further refine her product and take it to market.

Four students from the Cambridge High School, Abu Dhabi were announced winners of the Global DECA challenge – an energising, experiential exercise that challenges elementary college students worldwide, to generate an innovative and sustainable new use for a commonplace item.

Students from GEMS World Academy were recognised for winning the Phillip Harris STEM Competition for their “GEMS Jarvis Academy” project, a completely self-sufficient school design that can operate on an Island in the South Pacific. They had won AED 5,000 worth of STEM kits for their school. Students from the GEMS Honours Programme and the GEMS Astronomy Programme were also recognised and awarded at the ceremony.

A total of 247 GEMS students were awarded at the ceremony.