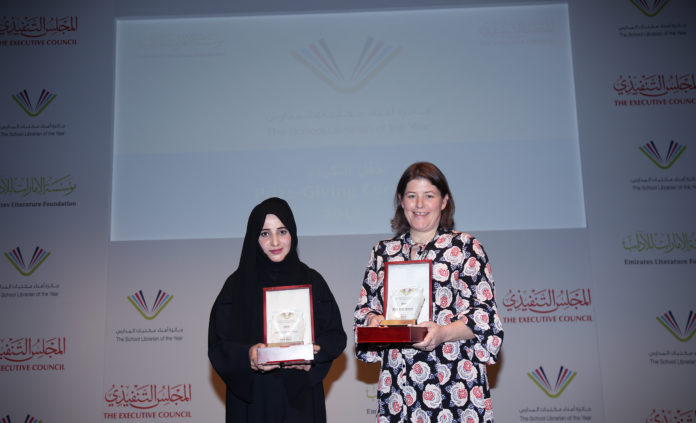 The winners of the School Librarian of the Year Awards 2019 were announced today at a special ceremony at the Emirates Airline Festival of Literature (1-9 March 2019).  The prestigious awards are presented by the Emirates Literature Foundation, in association with The Executive Council of Dubai, to recognise those Librarians who have demonstrated outstanding commitment in sharing their love of literature and promoting reading for pleasure among the student community whilst also raising academic and literacy standards in the school.

“Influencing children to read books for pleasure is one of the most important responsibilities there is in preparing the next generation to become well-rounded citizens,” said Isobel Abulhoul, OBE, CEO and Trustee of the Emirates Literature Foundation. “School librarians are committed to making a difference to literacy in their schools, sharing their passion for books and inspiring children to pick up a book and read. It is wonderful that through this award their hard work and commitment can be recognised.”

Shumous Majid Bin Faris, General Co-ordinator for the month of reading in Dubai and Advisor at the General Secretariat of Executive Council of Dubai, said that “The joint efforts to promote the culture of reading will contribute to enhancing the position of Dubai and its sustainable development, creating a knowledge-based society. She also added, “This award is a recognition of the outstanding role played by librarians to get our children to love and appreciate reading and learning. Librarians support our progress towards achieving excellence in the cultural field, in line with the UAE  National Strategy for Reading (2016-2026). The award contributes to empowering generations to face the future  and  creating a motivating environment.”

The Executive Council of Dubai has remained a strategic partner of the Emirates Literature Foundation in developing a framework to build and empower intellectucal capabilities among youth – aligned with Dubai Government’s efforts to create a knowledge-based economy in line with the UAE Vison 2021.

The winners were presented with their awards by H.H. Sheikh Ahmed Bin Saeed Al Maktoum, President of the Department of Civil Aviation, Chairman and Chief Executive Emirates Airline & Group, Chairman Dubai Airports and Chairman Emirates Literature Foundation, HE Abdulla Al Basti, Secretary-General of The Executive of Dubai, Mrs. Isobel Abulhoul, OBE, CEO and Trustee of the Emirates Literature Foundation and authors Nicola Morgan and Maitha Al Khayyat. The ceremony included a celebration lunch and a discussion panel on the importance of reading for pleasure

The prizes for each category are:

First Place: Trip to the Warner Bros. Studio Tour London – The Making of Harry Potter for

people, to include flights, accommodation and entry to the studio tour; visit to the British

library; an item of library furniture; voucher for AED2000 for library books

Second Place: Visit to Dubai Parks and Resorts for 4 people

including two nights’ accommodation at a Dubai hotel; voucher for AED1500 for library books