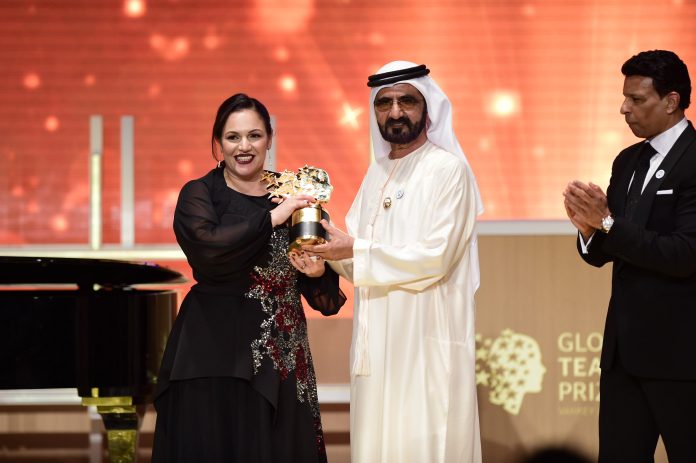 Andria Zafirakou, an art and textiles teacher from Alperton Community School, Brent, London, has been named as the winner of the Varkey Foundation Global Teacher Prize 2018, awarded under the patronage of His Highness Sheikh Mohammed bin Rashid Al Maktoum, the Vice President and Prime Minister of the United Arab Emirates and Ruler of Dubai.

“Being a great teacher requires resilience, ingenuity, and a generous heart. These are the qualities that you share with your students everyday. So thank you for all you have done and continue to do”.

“I would also like to extend a huge thank you to His Highness Sheikh Mohammed Bin Rashid Al Maktoum. For his support of the teaching profession and patronage of this prize.”

Now in its fourth year, the US$1 million award is the largest prize of its kind, and was set up to recognize one exceptional teacher who has made an outstanding contribution to the profession as well as to shine a spotlight on the important role teachers play in society.

Andria Zafirakou teaches in an inner-city school in Brent, one of the poorest parts of the UK, with over a third of children living in poverty and many of her students coming from crowded homes shared with multiple families. At the same time, some of her pupils are exposed to gang violence with the borough having the second highest murder rate in the UK. Brent is also ethnically diverse with the second largest proportion of black, Asian and minority ethnic (BAME) people in England and Wales, and a 2011 school census highlighting that 149 languages were spoken.

As a member of the school’s senior leadership team, Andria has transformed her school’s approach to reach often isolated young people so that they can engage in school life and perform to the best of their abilities.  She quickly realised that a one size fits all curriculum would not resonate with all her students so she set about redesigning it from top to bottom, alongside fellow teachers, in order to make it relevant to her pupil’s lives.  She helped a music teacher launch a Somali school choir and created alternative timetables to allow girls-only sports that would not offend conservative communities, leading the girls’ cricket team on to victory and winning the McKenzie Cup. In her own arts class, she worked with an “Artist in Residence” (Armando Alemdar) to creatively redesign the art curriculum to promote inspiration and help pupils confront and cope with the responsibilities of their complex home circumstances. As a result, Alperton has been awarded specialist school status in visual arts.

“I want to congratulate Andria Zafirakou for winning the Global Teacher Prize 2018. I hope Andria’s story will inspire those looking to enter the teaching profession and shine a powerful spotlight on the incredible work teachers do all over the world every day.”

The other nine finalists for the Global Teacher Prize 2018 are:

The original top 50 shortlisted teachers were narrowed down to ten finalists by a Prize Committee. The winner will be chosen from this ten by the Global Teacher Prize Academy. All ten finalists will be invited to Dubai for the Award ceremony at the Global Education and Skills Forum (GESF) on Sunday 18 March, where the winner will be announced live on stage in a red carpet gala event which is beamed around the world.