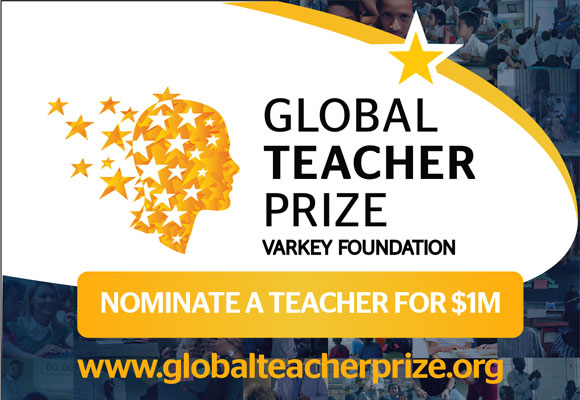 As prize applications open, over 25 former world leaders call on Governments around the world to protect and value teachers

Teachers from the UAE are urged to apply for the Varkey Foundation Global Teacher Prize 2016 at globalteacherprize.org. The prize is awarded under the patronage of His Highness Sheikh Mohammed Bin Rashid Al Maktoum, the Vice President and Prime Minister of the United Arab Emirates and Ruler of Dubai.

Now in its second year, and widely referred to as the Nobel Prize for teaching, the US$1 million award is the largest prize of its kind.

It was set up to recognise one exceptional teacher who has made an outstanding contribution to the profession as well as shine a spotlight on the important role teachers play in society. By unearthing thousands of stories of heroes that have transformed young people’s lives, the prize hopes to bring to life the exceptional work of millions of teachers all over the world.

At the same time as applications were declared open, the Varkey Foundation and Club de Madrid published an open letter signed by over 25 former world leaders calling on “Governments around the world to protect and value teachers, and play their part in restoring the respect that they so richly deserve.”

The letter also argues that: “Frequently the ills of society are laid at the door of teachers. They are blamed for everything from a decline in manners among young people to a lack of basic skills in the workplace. They have even, on occasion, been blamed for a country’s poor economic performance. Too often politicians see teachers as an easy target for short-term political gain.”

Sunny Varkey, Founder of the Global Teacher Prize, thanked the signatories of the letter. He said: “Teachers matter. These former world leaders understand that we need great teachers to grow great minds in order to solve the world’s problems. Raising the bar of respect and celebrating teachers across the world can play an important role in helping to recruit and retain the best candidates for the profession.”

The applicants for the Global Teacher Prize 2016 will be shortlisted down to a top fifty and then a final ten, which will be announced in February 2016. The winner will be chosen from the ten finalists by the global teacher prize academy made up of prominent individuals including academy award winning actor Kevin Spacey; Wendy Kopp, CEO Teach For All; and Brett Wigdortz, Founder of Teach First.

All ten finalists will be flown to Dubai for an award ceremony taking place at the Global Education and Skills Forum in March 2016 where the winner will be announced live. The closing date for applications is the 10 October 2015.

Since its launch in March 2014, the Global Teacher Prize has received huge global support from heads of state, prime ministers, education ministers, business leaders and NGO heads. The Pope also met a selection of last year’s shortlisted candidates inside the Vatican. The story of the last year’s top ten finalists and eventual winner, Nancie Atwell, a teacher from Maine, US, was written and broadcast by some of the world’s most influential media outlets.

“Last year, we were proud to receive over 5000 nominations for the Global Teacher Prize. However, we want to see many more exceptional teachers from every corner of the planet apply this year, especially from the UAE. The more teachers that apply, the greater the celebration for this most noble of professions.”

“I applaud the launch of the Global Teacher Prize, which recognises their worth. The award is in line with my Global Education First Initiative, launched in 2012, which aims to give momentum to the worldwide movement to put every child in school, improve the quality of learning and foster global citizenship.”

The public can nominate a teacher, or teachers can apply themselves by filling an application form at globalteacherprize.org. If teachers are being nominated, the person nominating them will write a brief description online explaining why.  The teacher being nominated will then be sent an email letting them know they’ve been nominated and inviting them to apply for the prize.   Applicants can apply in English, Mandarin, Arabic, French, Spanish, Portuguese and Russian. To join the conversation online follow @TeacherPrize and #teachersmatter on: www.twitter.com/TeacherPrize and www.facebook.com/TeacherPrize