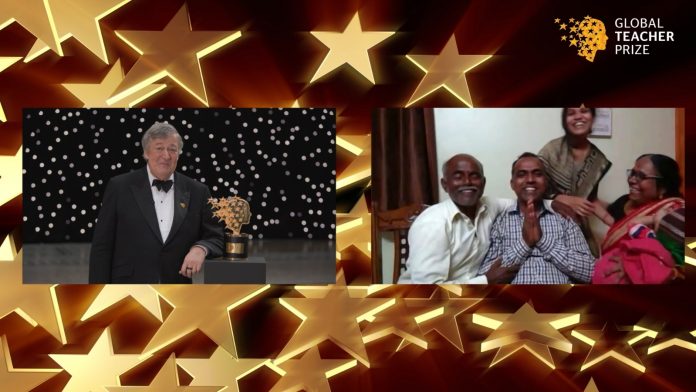 Indian village teacher Ranjitsinh Disale, who transformed the life chances of young girls at the Zilla Parishad Primary School, Paritewadi, Solapur, Maharashtra, India, has been named the winner of the Global Teacher Prize 2020, in partnership with UNESCO.

Now in its sixth year, the US$1 millionaward established by the Varkey Foundation was launched in Dubai in 2014 under the patronage of Sheikh Mohammed Bin Rashid Al Maktoum, the Vice President and Prime Minister of the United Arab Emirates and Ruler of Dubai. The Global Teacher Prize, nurtured in Dubai, becomes a gift to the world as London is the first of the new host cities.

“We’d like to thank His Highness Sheikh Mohammed Bin Rashid Al Maktoum, the Vice President and Prime Minister of the United Arab Emirates and Ruler of Dubai, for creating such a powerful platform to celebrate the world’s teachers. Nurtured in Dubai over the last six years, the global teacher prize ceremony has become a great gift to the world as London becomes the first of the new host cities, spreading its message into every corner of the globe.

“Congratulations to Ranjitsinh Disale for winning the Global Teacher Prize 2020. By sharing the prize money you teach the world the importance giving.

“I now encourage you to use this platform to give all teachers a voice. There is not a moment to lose as it will fall on young people to find solutions to problems that their parents and grandparents have lacked the will to solve, including climate change, conflict and global pandemics. We must equip young people with an education that will help them build a better tomorrow and that always starts by listening to teachers.”

In his winning speech Mr Disale made the extraordinary announcement that he will share half the prize money with his fellow Top 10 finalists, resulting in the other nine finalists receiving just over US$55,000 each. This is the first time in the Global Teacher Prize’s six year history that the overall winner has shared the prize money with other finalists.

Mr Disale was selected from over 12,000 nominations and applications from over 140 countries around the world. The Global Teacher Prize was set up to recognize one exceptional teacher who has made an outstanding contribution to the profession as well as to shine a spotlight on the important role teachers play in society.

For the first time, the Global Teacher Prize winning announcement was made at a virtual ceremony broadcast from the Natural History Museum in London, with  comedian, actor, writer and presenter Stephen Fry announcing the winner. The ceremony also included a special recognition for one teacher – a COVID hero – who has gone above and beyond to keep young people learning during the COVID-19 pandemic. The US$45,000 COVID Hero Award, supported by CVC Capital Partners, was given to UK Maths teacher Jamie Frost, whose free DrFrostMaths became a lifeline for students shut out of classrooms all around the world.

At this year’s ceremony, the Varkey Foundation was also delighted to announce the launch of the new Chegg.org Global Student Prize, a US$50,000 sister prize to the Global Teacher Prize, which will open applications and nominations in the new year. The Global Student Prize will create a powerful new platform to highlight the efforts of extraordinary students throughout world that are making a real impact on learning, the lives of their peers and on society beyond.

“The COVID-19 pandemic has exposed education and the communities it serves in a multitude of ways. But in this hard time, teachers are giving their best to make sure every student has access to their birthright of a good education.

“Teachers are the real change-makers who are changing the lives of their students with a mixture of chalk and challenges. They always believe in giving and sharing.

“And therefore, I am very pleased to announce that I will share 50% of the prize money equally among my fellow Top 10 finalists to support their incredible work.

I believe, together, we can change this world because sharing is growing”.

“It’s my great pleasure to congratulate Mr Ranjitsinh Disale from Maharashtra in India for winning this year’s Global Teacher Prize. UNESCO is a proud partner of the Global Teacher Prize, an award that has done so much to highlight how teachers transform the lives of young people everywhere.

“I speak to you at a critical moment for education worldwide. The COVID pandemic has dealt a severe blow to education systems around the world, but the learning crisis must not turn into a learning catastrophe and it is the contribution of teachers during these difficult times that is making the difference really. I recognise their hard work and sacrifice, but they need all the support we can give them so they can help the next generation find their feet in an increasingly uncertain world.

When Ranjitsinh arrived at the Zilla Parishad Primary School in 2009 it was a dilapidated building, sandwiched between a cattle shed and a storeroom. Most of the girls were from tribal communities where school attendance could sometimes be as low as 2% and teenage marriage was common. For those that did make it to school, the curriculum was not in their primary language (Kannada), leaving many students unable to learn at all. Ranjitsinh was determined to turn this around, moving to the village and going to great efforts to learn the local language. Ranjitsinh then not only translated the class textbooks into his pupils’ mother tongue but also embedded them with unique QR codes to give students access to audio poems, video lectures, stories and assignments. Crucially, by analysing their reflections Ranjitsinh would change the content, activities and assignments in the QR coded textbooks to create a personalized learning experience for each student. Further to this, he upgraded the QR Coded Textbooks with immersive reader and Flipgrid tools to aid girls with special needs.

The impact of Ranjitsinh’s interventions has been extraordinary: there are now no teenage marriages in the village and 100 per cent attendance by girls at the school. The school was also recently awarded the best school in the district with 85% of his students achieving A grades in annual exams. One girl from the village has now graduated from University, something seen as an impossible dream before Ranjitsinh arrived.

Ranjitsinh then went on to create nothing short of a revolution in the use of QR coded textbooks throughout India. His school was the first in the state of Maharashtra to introduce them and after submitting a proposal and successful pilot scheme, the State Ministry announced in 2017 that they would introduce QR coded textbooks across the state for all grades 1-12. Following the success of this, HRD Ministry of India asked NCERT (National Council of Education Research and Training) to study the impact of QR Coded Textbooks and how this can be scaled up nationally. In 2018, HRD Minister Prakash Javdekar announced that all NCERT textbooks would have embedded QR Codes. Beyond the classroom, Ranjitsinh helps his students apply their learning to tackle real world problems they are facing. With his school in a drought-prone district of Maharashtra, his school has now successfully tackled the issue of desertification, increasing green land from 25% to 33% in the last ten years. In all, 250 hectares of land surrounding his village was saved from desertification, earning his school the ‘Wipro Nature for Society’ award in 2018.

Ranjitsinh is also passionate about building peace between young people across conflict zones. His ‘Let’s Cross the Borders’ project connects young people from India and Pakistan, Palestine and Israel, Iraq and Iran and USA and North Korea. Over a six-week programme, students are matched with a peace buddy from other countries with whom they closely interact – preparing presentations and listening to guest speakers together to understand their similarities. So far, Ranjitsinh has initiated an incredible 19,000 students from eight countries into this programme. Further to this, using the Microsoft Educator Community platform, Ranjitsinh spends his weekends taking students from schools around the world with depleted resources on virtual field trips. He is most well-known for demonstrating scientific experiments from the science lab he has built in his home. Official numbers from Microsoft show that Ranjitsinh has taught an incredible 85,000 plus students from over 1400 classrooms in 83 countries via these virtual lessons. But Ranjitsinh doesn’t stop there. He is determined to ensure that everything he learns is passed on to other teachers. During summer vacations, Ranjitsinh has trained, face to face, more than 16,000 in-service teachers throughout the state of Maharashtra on how they can augment their teaching using technology. As a result of all Ranjitsinh’s endeavours, the sitting CEO of Microsoft, Satya Nadella, recognized Ranjitsinh as one of three stories from India in his 2017 book ‘Hit Refresh’.