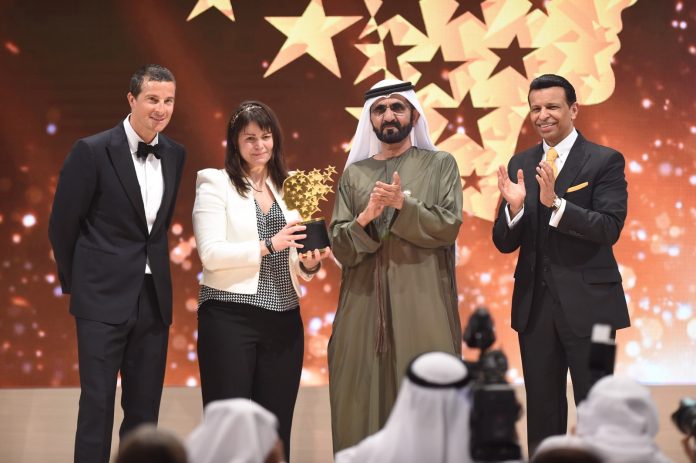 Bear Grylls parachutes down to bring trophy into ceremony hall

Announcement made by Astronaut from International Space Station

Maggie MacDonnell, who teaches at the Ikusik School in Salluit, a remote innuit village nestled in the Canadian Arctic, has been named as the winner of the Varkey Foundation Global Teacher Prize 2017, awarded under the patronage of His Highness Sheikh Mohammed Bin Rashid Al Maktoum, the Vice President and Prime Minister of the United Arab Emirates and Ruler of Dubai.

The prize was handed to Maggie MacDonnell by His Highness Sheikh Mohammed bin Rashid Al Maktoum at a glittering ceremony.

“I’d like to be the first person in history to thank all the world’s teachers from space.

“Congratulations Maggie. At least once a day, as we orbit the earth, I get a view of the Canadian arctic where you teach. You should see how beautiful it looks from 220 miles up. And it’s a place that you’re protecting by teaching the next generation how they can take care of it. Thank you Maggie and to all the world’s teachers. See you all back home”.

“Maggie MacDonnell – on behalf of all Canadians – from one teacher to another – congratulations on winning the Global Teacher Prize 2017.

“You chose to teach at the Ikusik school in Salluit, a remote village in the Canadian Arctic. There are no roads to Salluit– it is only accessible by air and it gets cold, really cold. Minus twenty this time of year.

“I’d like to say thank you to every teacher out there. Teachers owe responsibilities to many people – to students, to parents, to the community, the school board. But in the end, as all great teachers know – they are ultimately responsible to something far greater. They are responsible to the future – and for the world that will be shaped by the children they teach”.

Now in its third year, the US $1 million award is the largest prize of its kind, and was set up to recognize one exceptional teacher who has made an outstanding contribution to the profession as well as to shine a spotlight on the important role teachers play in society.

Speaking on stage after being presented the award, Maggie MacDonnell said:

“The nomination process created a means for more than 20,000 teachers to feel valued and revitalized and to have their professional commitment validated.

“On a personal note I would like to invite my students to share in this award, as I have won this not for them but with them.”

After completing her Masters degree Maggie MacDonnell sought out opportunities to teach indigenous communities in Canada and for the last six years has been a teacher in the Canadian Arctic. In winter temperatures are minus 25C. There were six suicides in 2015, all affecting young males between the ages of 18 and 25.

Due to the harsh conditions there are very high rates of teacher turnover which is a significant barrier to education in the Arctic. Many teachers leave their post midway through the year, and many apply for stress leave.

There are tremendous gender issues in the Inuit region of Nunavik where teenage pregnancies are common and gender roles often burden young girls with large domestic duties. Also, in areas of high deprivation, isolation and limited resources, teenagers often turn to drinking and smoking, and even drugs and self-harm, as forms of escape and release.

Maggie’s whole approach has been about turning students from “problems” to “solutions”. She has created a life skills programme specifically for girls which has seen a 500 per cent improvement in girls’ registration. Maggie has also dramatically improved school attendance by getting her students involved in running a community kitchen, attending suicide prevention training and hiking through national parks to understand environmental stewardship. Maggie also established a fitness centre that has become a hub for youth and adults in the local community. It is relieving stress, helping young people grow stronger physically and mentally and bringing the whole community together in a profound and lasting way. Maggie has also been a temporary foster parent in the community, including to some of her own students.

“We’re truly proud to be the country partner of the fifth Global Education & Skills Forum. We in Italy were so inspired by the brilliant idea of the Global Teacher Prize that we launched our own national teacher prize. You wouldn’t believe how much it has captured the public’s imagination. We have seen thousands of nominations – from Milan in the north of Italy to Naples in the south. But most importantly it has sparked thousands of conversations across our country about the role of teachers in society.”

In a video message broadcast into the ceremony, Prince Harry paid tribute to the work of teachers around the world. Prince Harry said:

“In addition to reading, writing and arithmetic, the very best teachers go beyond the pages of textbooks to teach young people about determination, aspiration, resilience and compassion. We will all face setbacks and challenges in our lives and our teachers play a vital role in preparing us for these ups and downs”.

“I want to congratulate Maggie Macdonnell for winning the Global Teacher Prize 2017 from such a huge number of talented and dedicated teachers. I hope her story will inspire those looking to enter the teaching profession and also shine a powerful spotlight on the incredible work teachers do all over the world every day.”

The other nine finalists for the Global Teacher prize 2017 were:

David Calle, from Madrid, Spain, the founder and creator of the Unicoos educational website

Maggie MacDonnell, winner of the Global Teacher Prize 2017. Photos by GESF.
1 of 3