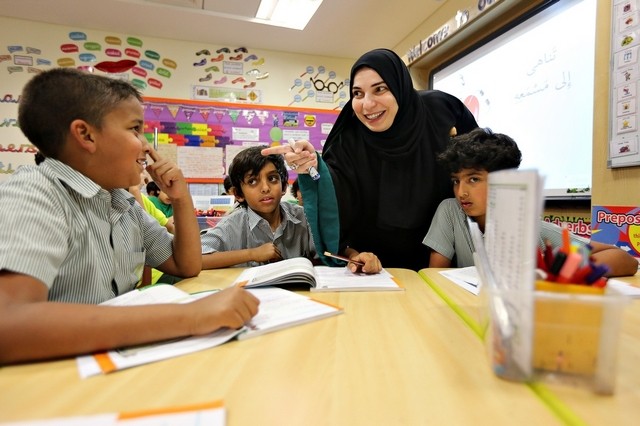 The job of attracting more UAE nationals into teaching looks a lot harder after the results of a British University Dubai survey of pupils that showed teaching as the least popular choice of careers.

“The question is, how can we interest Emirati male students to come and pursue the teaching profession?” asks the study’s author and senior lecturer of science education, Dr Sufian Forawi.

“It is really a very difficult issue to tackle, but one of the issues would be really to give adequate incentives and to change actually the platform of the teaching profession itself. That will require a lot of work.

“It’s a very needed area, especially when you look at how the young students are being influenced, with all due respect, by people from all different countries. But they really need to also have that influence of those role models who are Emirati.”

The two-year study, funded by the Emirates Foundation, surveyed 5,320 Emirati pupils from Grades 8, 10 and 12 in all emirates. They were asked to answer 54 questions about education, and rank 28 careers.

The top three most desirable professions were engineering, medicine and policing. The three most unpopular were university professor, and secondary school teacher, which tied for last with chef.

In its second year, the number of pupils surveyed dropped to 3,710 because many of the participants had graduated.

In terms of career clusters, education ranked last in a field of seven, which included engineering, manufacturing and technology; government, law and public safety; health science; business and finance; arts and communication; hospitality and sports.

Last year, there were only 50 Emirati teachers in Abu Dhabi private schools. The other 11,770 teachers were expatriate, according to figures published by the Abu Dhabi Education Council.

In the same academic year in Dubai, there were only 24 Emirati teachers, including one male, employed in the private schools.

“Among the three teaching jobs in the study, only the choice of becoming an elementary school teacher ranked seventh without greater response,” says the study.

“This is an interesting result, yet similar to what previous research has indicated for both boys and girls that they can be influenced by the nurturing aspect of elementary teachers.”

With more Emiratis choosing to enroll their children in private schools, it is imperative to boost the number of local teachers in the classroom, said Fatma Al Marri, chief executive of Dubai Schools Agency.

“In the past few years there has been an increase in the number of Emirati students studying in the private sector,” Ms Al Marri said. “In line with the Government’s national agenda, we feel it’s important for these students to retain a sense of national identity.

“An increase in the number of Emirati teachers would help to ensure key subjects, such as Arabic and Islamic Studies, are taught according to UAE tradition and heritage.

“Meanwhile, the annual inspection results show that the quality of private schools has improved significantly since 2008.”

One Emirati woman who could think of no greater job than that at the blackboard is Maha Salha, 43, who teaches Arabic at Aldar Academies’ Al Mushrif Primary School.

Mrs Salha said that when she was a child, there was nothing she wanted more than to grow up to be just like her parents. Her father was a high school maths teacher and her mother taught Arabic.

She said that through them she came to see teaching as a challenging and noble profession with countless rewards.

“It’s the best job in the world,” said Mrs Salha. “The children are the future and it’s up to us as teachers, the ones who work at schools, to educate them and give them motivation to build a country, to build a future because our hope for our future relies on them.”