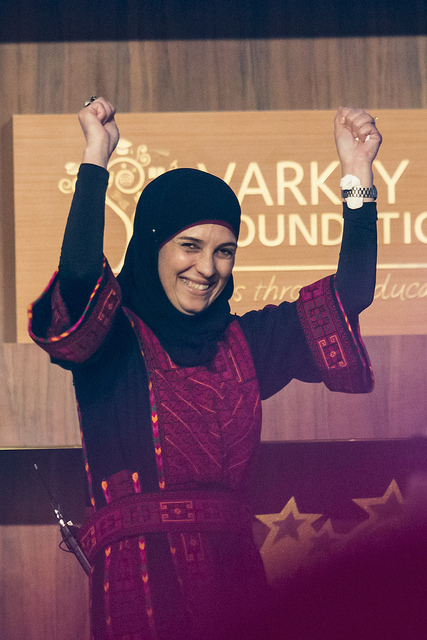 Announcement made by His Holiness Pope Francis

Announced via a special video message broadcast into the Global Teacher Prize ceremony taking place at the Global Education and Skills Forum (GESF) 2016 in Dubai – His Holiness Pope Francis said:

“I would like to congratulate the teacher Hanan Al Hroub for winning this prestigious prize due to the importance that she gave to the ‘playing’ part in the education of the children.

“A child has the right to play. Part of education is to teach children how to play because you learn how to be social through games as well as learn the joy of life.

“A population that is not well educated because of the wars, or by other reasons that exist in order not to get any education, is a population that decays. That is why I would like to highlight the noble profession of a teacher”.

Now in its second year, the US$1 million award is the largest prize of its kind.

The Global Teacher Prize was set up to recognize one exceptional teacher who has made an outstanding contribution to the profession as well as to shine a spotlight on the important role teachers play in society. By unearthing thousands of stories of heroes that have transformed young people’s lives, the prize hopes to bring to life the exceptional work of millions of teachers all over the world.

Hanan Al Hroub grew up in the Palestinian refugee camp, Bethlehem, where she was regularly exposed to acts of violence. She went into primary education after her children were left deeply traumatised by a shooting incident they witnessed on their way home from school. Her experiences in meetings and consultations to discuss her children’s behaviour, development and academic performance in the years that followed led Hanan to try to help others who, having grown up in similar circumstances, require special handling at school.

With so many troubled children in the region, Palestinian classrooms can be tense environments. Hanan embraces the slogan ‘No to Violence’ and uses a specialist approach she developed herself, detailed in her book, ‘We Play and Learn’. She focuses on developing trusting, respectful, honest and affectionate relationships with her students and emphasises the importance of literacy. She encourages her students to work together, pays close attention to individual needs and rewards positive behaviour.

Her approach has led to a decline in violent behaviour in schools where this is usually a frequent occurrence; she has inspired her colleagues to review the way they teach, their classroom management strategies and the sanctions they use.

Hanan has shared her perspective at conferences, meetings and teacher training seminars. She hopes that, with education, there can be an elimination of violence altogether.

Speaking after the being presented the prize by His Highness Sheikh Mohammed Bin Rashid Al Maktoum, the Vice President and Prime Minister of the United Arab Emirates and Ruler of Dubai, and Sunny Varkey, Founder of the Varkey Foundation, Hanan Al Hroub said:

“Each day, the role of the teacher is reinforced and its importance is confirmed as the world questions what future we want for our children.

“Yes, we can help our children investigate this world and understand it, which helps them to be integrated within it. We can teach children to be effective and inventive through various contexts which include entertainment, drawing and movement. We need to help children with questioning, dialogue, thinking and feeling to help them express themselves.

“We, as teachers can build the values and morals of young minds to ensure a fair world, a more beautiful world and a more free world.

“The future seems far and ambiguous, however, when you are involved in making it, the world represents a light”.

“All of you who are the finalists in this year’s Global Teacher Prize, congratulations.

“And the key to unlocking a lifelong love of learning is a teacher. And I’m biased as my wife Jill is a full time professor who teaches 15 credits a semester at a community college, and she’s been doing it for a long time. But as she often says, “teaching is not what she does, it’s who she is”.

“I’ve benefited from the incredible teachers I’ve had as a child and all the way to adulthood. Teachers who believed in me, infused in me intellectual curiosity that has carried me throughout my whole life. And the great teachers, are always selfless”.

“I would like to congratulate, Hanan Al Hroub. Your work is a great inspiration and an example of the work of teachers around the world.

“I’ve been fortunate to have been taught by some of the best teachers in the world, and I know what an incredible teacher can mean to a child. A good teacher holds the path to influence, inspire and shape a young person’s life for the better.

“Teachers are uniquely placed, to recognize and support the most vulnerable and troubled children in our society.

“Reaching young people early on, in their education, and providing them with the actual support they need, and give them the best possible chance in life. This is an incredible responsibility, and this is why the Royal Foundation of the Duke and Duchess of Cambridge, and Prince Harry, has partnered with the Varkey Foundation, on a range of programmes which support teachers to help young people in some of the most disadvantaged communities of the United Kingdom”.

“I want to congratulate Hanan Al Hroub for winning the Global Teacher Prize 2016 from such a huge number of talented and dedicated teachers. I hope her story will inspire those looking to enter the teaching profession and also shine a powerful spotlight on the incredible work teachers do all over Palestine and throughout the world every day.”

“I applaud the launch of the Global Teacher Prize, which recognizes their worth. The award is in line with my Global Education First Initiative, launched in 2012, which aims to give momentum to the worldwide movement to put every child in school, improve the quality of learning and foster global citizenship.”

“When I was starting out, I was inspired by an older, more experienced actor, who told me that he thought I ought to go into acting professionally. That’s the kind of mentoring and personal support that every young person needs to realise their potential.

“It’s the kind of encouragement and guidance that good teachers give to their pupils every day.  And that is why I support the Varkey Foundation’s Global Teacher Prize. However much we achieve in life, we all began learning the basics from a teacher in a classroom.  Those that teach – devoting their talents and time to nurturing the talents of others – deserve to be respected and celebrated.”

The winner was chosen from ten finalists by a Global Teacher Prize Academy. All ten finalists were invited to Dubai for the Award ceremony at the Global Education and Skills Forum 2016 (GESF).

The other nine finalists for the Global Teacher prize 2016 were:

Further information about the Global Teacher Prize is available here:http://www.globalteacherprize.org. To join the conversation online follow #TeachersMatter on: https://twitter.com/TeacherPrize and https://www.facebook.com/teacherprize