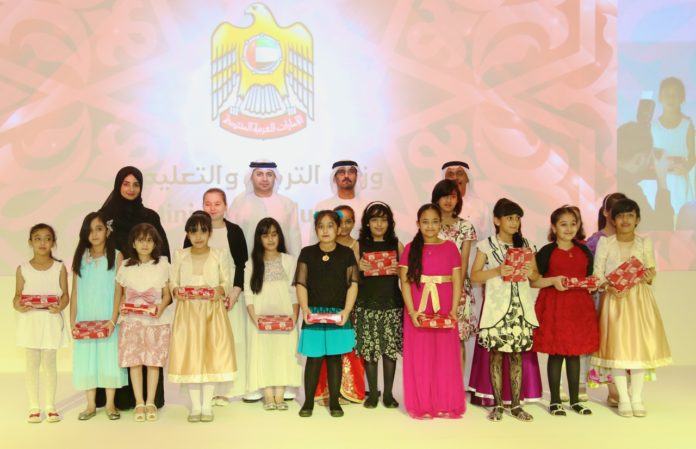 The Ministry of Education celebrated the eleventh anniversary of the death of founding leader Sheikh Zayed bin Sultan Al Nahyan. Educational leaders and community figures along with hundreds of students, as well as parents were all in attendance at the event held on July 8, 2015. The event featured performances from a large number of students representing different institutions.

The celebration began with the screening of a special film that showcased the various stages of development within the UAE. Also included in the presentation were quotes by and photographs of Sheikh Zayed. This was followed by His Highness Sheikh Dr Sultan bin Mohammed Al Qasimi, Supreme Council Member and Ruler of Sharjah, who applauded the humanitarian exploits, insights and wisdom that characterised Sheikh Zayed, “God rest his soul.”

At the outset of the ceremony, HE Hussein Al Hammadi, Minister of Education, said that Sheikh Zayed and his valuable contributions to the UAE and the region will remain immortal. He noted that the founding leader and humanitarian dedicated himself and all his possessions to human rights; showing kindness to all. He said that Sheikh Zayed believed in unity and renaissance, safeguarding the nation, preserving the dignity of destitute people of different races and ethnicities.

HE Al Hammadi spoke glowingly of the many contributions that Sheikh Zayed made to his people, the region and the world by highlighting his humanitarian efforts and his tireless efforts that have resulted in the UAE being a model country at the highest international level.

His Excellency concluded with one of Sheikh Zayed’s quotes, “The education of our people is a great wealth. We are proud of our educated nation because through knowledge and science we will open the horizons of a glorious future.”

The celebration continued with HE Al Hammadi honouring 5 employees in the ministry, the students who won various educational competitions, and also others working in the ministry.