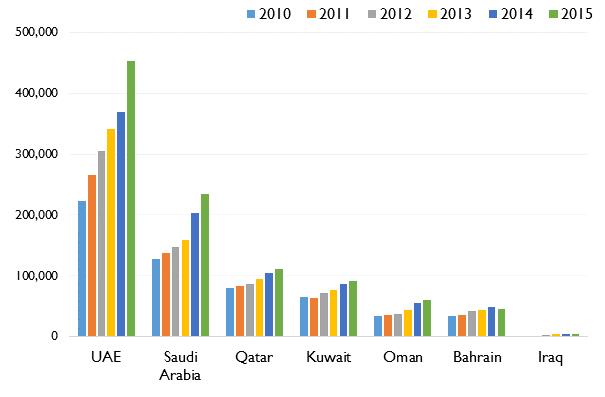 The United Arab Emirates leads both the region and the world for the number of English-medium international schools, with 505 schools teaching over 452,900 students.

Within the UAE, Dubai has the highest concentration of international schools (a total of 245) followed by Abu Dhabi (144 schools). Local families in both Emirates are increasingly choosing international schools for their children who now make up a significant percentage of the student intake. The combined high demand from local and expatriate families is fuelling the continued growth.

Demand, particularly at the best international schools in Dubai and Abu Dhabi, continues to outstrip supply and waiting lists remain long. In Dubai, the Knowledge and Human Development Authority (KHDA) anticipates an increase in enrolment at international schools of 7% per year for the next five years. It is planning for 90,000 additional school places in 60 new and expanded schools.

Qatar is predicted to see major growth over the next decade. The country currently has 147 international schools teaching 111,200 students, the majority of which (130) are located in Doha where more schools are urgently needed.

In addition to Qatar and the UAE, the market throughout the Middle East continues to grow with continued expansion of note in Saudi Arabia, which now has 202 international schools.

More in-depth data, as well as analysis and market intelligence on the leading countries for international schools in the world, is available in ISC Research Market Intelligence Reports.  For information visit www.iscresearch.com

NOTE:
All figures are based on data from ISC Research as of January 2015.