Whether or not you are new to the UAE, it helps to know as much about the culture and heritage of this constantly evolving country. Each Emirate has its own unique history and story that speaks to a progressive nation, intent on being the best at what it does. In this Know Your UAE, we explore aspects of the UAE’s rich culture and discover some of the traditions that have endured the test of time. The Sharjah Heritage Museum provides insight into the history of the UAE and its people through visual and auditory displays of the landscape, lifestyles, traditional knowledge, celebrations and more.

Due to the extensive amount of information that the museum covers, our feature on the museum will be done in a three part series.

The building that houses the Sharjah Heritage Museum was built around 1795 by the Al Qasimi family and is made mainly of coral, chandal wood, palm jus mortar and plaster. The house used to be known as Bait Saeed Al Taweel, which means ‘The House of Tall Saeed”. This is a reference to Saeed Bin Mohammad Al Shamsi who once lived there. Al Taweel is an informal name that referred to Saeed’s height. Bait Saeed Al Taweel was restored in the 1990s and opened as the Islamic Museum in 1996. Further restoration was done in 2010/2011 to the entire building due to damage caused by termites and moisture. This restoration process was part of the Heart of Sharjah restoration project.

Visitors are taken through a time capsule that shows how Emiratis, who occupied the different landscapes, lived. It also shows the differences in clothing, building materials and some traditional practices among these denizens. Three main landscapes are featured; desert, mountains and the coastal areas of the UAE.

Great importance was placed on traditional knowledge and skills because they were important to the development and survival of the early inhabitants of the UAE. Traditional knowledge and skills included; being able to identify the different types of winds for navigating safely at sea, observing the stars in order to calculate the days of the year and al tajfeer (tracking) which helped individuals to navigate the land to find animals and people. Traditional healers acted as doctors and midwives who cared for the population.

After a baby is born, it is washed with a mixture of hot water, salts and herbs. The father recites the call to prayer in the baby’s right ear and the iqamah (a saying recited before prayers begins) into its left ear. On the first or third day, the father chooses the baby’s name based on the names of family members, religious figures or the child’s characteristics. Singing, reading, protective verses (mu’awidhitayn) and feeding them a mixture of herbs are some of the techniques that were used to calm babies. Some people calmed their children by perfuming them with frankincense and khatf. In the past women gave their children water mixed with rock candy or water mixed with dates. Women also used baby milk bottles and formula milk powder to feed their young.

Also important is the aqeeqa and tahleeq. For the aqeeqa, two animals are slaughtered to commemorate a boy and one for a girl. Tahleeq is the ritual of shaving a baby’s hair. The weight of the baby’s hair is used to decide the amount of silver, gold or money that the family will donate to the poor.

This was a tree in Sharjah where people socialised. Al Rolla Square is located in the heart of Sharjah near Al Hisn. The square was home to an old large banyan tree where people regularly gathered during celebrations, holidays, horseracing and poetry recitals. The name rolla is derived from roal which is the name given to the tree’s fruit. The tree was said to have been about 15m tall with a 30m wide outstretched network of branches which, provided enough shade for more than 500 people to gather under. It is said that a former ruler of Sharjah, Sheikh Sultan bin Saqr bin Rashid Al Qasimi 1 (1803-1866), brought it to Sharjah. It is believed that the tree had lived for 150 years before dying in 1978. Rolla Square was built as a memorial to the tree.

Arabs created an astronomical calendar called the drour for calculating the variations in the days of the year. It was used to estimate the weather and the seasons. These seasons were planting, harvesting, pearl diving and fishing seasons. The year is divided into 36 der; each der is equal to 10 days. The remaining 5 days are referred to as ‘al khams al masareeq’… the five stolen days. Counting begins in the month of August with the sighting of the Souhail star. From that point on the next 100 days would be autumn, the second 100 days would be winter. The next 100 days are spring and the remaining days are summer. Some people living in the northern emirates and north of the gulf observed winds blowing from the east to calculate their calendar. Their calendar was called nourouz, which means ‘a new day’ in Persian. 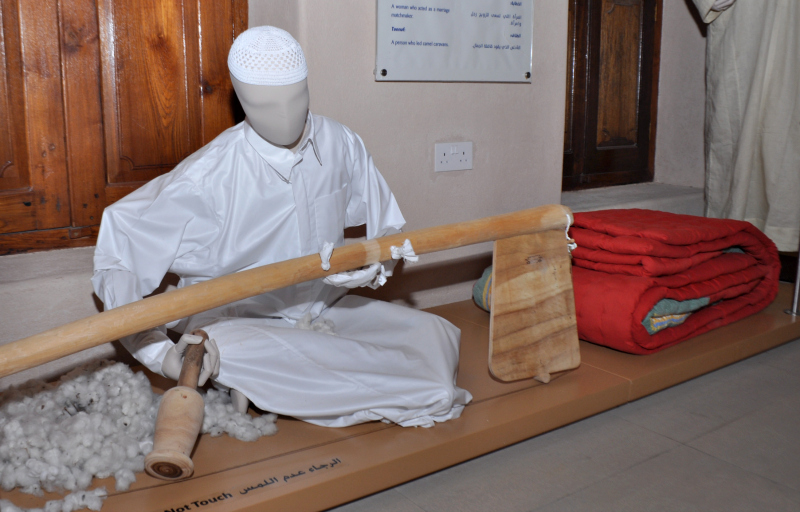 To experience a taste of Sharjah’s rich history and UAE traditions, please visit the Sharjah Heritage Museum located at Al Mareija, Sharjah, United Arab Emirates. They are opened Saturday to Thursday from 8:00am – 8:00pm and on Fridays from 4:00pm – 8:00pm. English speaking tour guides are available upon request but be sure to call +97165680006 to book an appointment and for additional information. You can also visit their website www.sharjahmuseums.ae for additional information.

Join us in the next issue for more on the Sharjah Heritage Museum and the culture of the UAE.