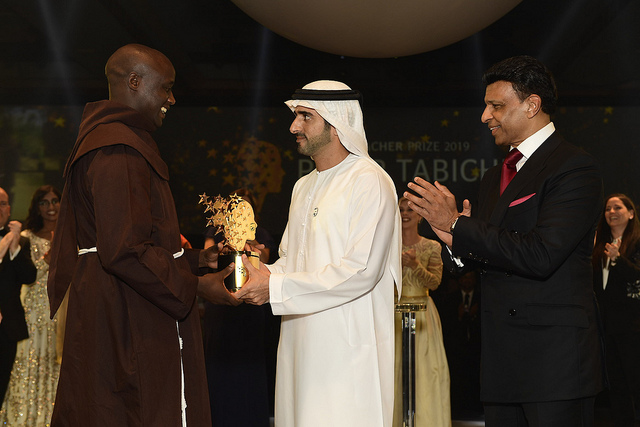 Peter Tabichi, a Maths and Physics teacher at Keriko Secondary School, Pwani Village, Nakuru, Kenya, has been named as the winner of the Varkey Foundation Global Teacher Prize 2019, awarded under the patronage of His Highness Sheikh Mohammed Bin Rashid Al Maktoum, the Vice President and Prime Minister of the United Arab Emirates and Ruler of Dubai.

The glittering award ceremony was hosted by actor, singer, and producer Hugh Jackman, who performed songs from musical film The Greatest Showman, including The Greatest Show and Come Alive, before announcing the winner.

“Every day in Africa we turn a new page and a new chapter. Today is another day. This prize does not recognise me but recognises this great continent’s young people. I am only here because of what my students have achieved. This prize gives them a chance. It tells the world that they can do anything.

“As a teacher working on the front line I have seen the promise of its young people – their curiosity, talent, their intelligence, their belief. Africa’s young people will no longer be held back by low expectations. Africa will produce scientists, engineers, entrepreneurs whose names will be one day famous in every corner of the world. And girls will be a huge part of this story.

“I believe science and technology can play a leading role in unlocking Africa’s potential. We all know that scientific discovery and innovation fuel progress, facilitate development and can tackle issues such as food insecurity, water shortages and climate change.

“It’s morning in Africa. The skies are clear. The day is young and there is a blank page waiting to be written. This is Africa’s time.”

“Mr Peter Tabichi – on behalf of all Kenyans – let me congratulate you for winning the Global Teacher Prize this year. You are a shining example of what the human spirit can achieve – not just for Kenya – not just for Africa – but for the world.

“Peter – your story is the story of Africa, a young continent bursting with talent. Your students have shown that they can compete amongst the best in the world in science, technology and all fields of human endeavour. All we need is together to give them the right support. You give me faith that Africa’s best days are ahead of us and your story will light the way for future generations.”

Sunny Varkey, the founder of the Varkey Foundation, said:

“Everyday in classrooms throughout the world teachers light the spark of curiosity. I want to congratulate Peter Tabichi for winning the Global Teacher Prize 2019. I hope Peter’s story will encourage others to enter the teaching profession and shine a spotlight on the truly inspiring work teachers do to make tomorrow brighter than today.”

Now in its fifth year, the US $1 million award is the largest prize of its kind and was set up to recognize one exceptional teacher who has made an outstanding contribution to the profession as well as to shine a spotlight on the important role teachers play in society.

Peter Tabichi is a science teacher who gives away 80% of his monthly income to help the poor.  His dedication, hard work and passionate belief in his students’ talents have led his poorly-resourced school in remote rural Kenya to emerge victorious after taking on the country’s best schools in national science competitions.

Peter, 36, teaches at Keriko Mixed Day Secondary School in Pwani Village, situated in a remote, semi-arid part of Kenya’s Rift Valley. Here, students from a host of diverse cultures and religions learn in poorly equipped classrooms. Their lives can be tough in a region where drought and famine are frequent.  Ninety-five percent of pupils hail from poor families, almost a third are orphans or have only one parent, and many go without food at home. Drug abuse, teenage pregnancies, dropping out early from school, young marriages and suicide are common.

Turning lives around in a school with only one computer, poor internet, and a student-teacher ratio of 58:1, is no easy task, not least when to reach the school, students must walk 7km along roads that become impassable in the rainy season.

Undeterred, Peter started a talent nurturing club and expanded the school’s Science Club, helping pupils design research projects of such quality that 60% now qualify for national competitions. Peter mentored his pupils through the Kenya Science and Engineering Fair 2018 – where students showcased a device they had invented to allow blind and deaf people to measure objects. Peter saw his village school come first nationally in the public schools category. The Mathematical Science team also qualified to participate at the INTEL International Science and Engineering Fair 2019 in Arizona, USA, for which they’re currently preparing. His students have also won an award from The Royal Society of Chemistry after harnessing local plant life to generate electricity.

Peter and four colleagues also give low-achieving pupils one-to-one tuition in Maths and Science outside class and on the weekends, where Peter visits students’ homes and meets their families to identify the challenges they face.  Despite teaching in a school with only one desktop computer with an intermittent connection, Peter uses ICT in 80% of his lessons to engage students, visiting internet cafes and caching online content to be used offline in class. Through making his students believe in themselves, Peter has dramatically improved his pupils’ achievement and self-esteem. Enrolment has doubled to 400 over three years, and cases of indiscipline have fallen from 30 per week to just three. In 2017, only 16 out of 59 students went on to college, while in 2018, 26 students went to university and college. Girls’ achievement in particular has been boosted, with girls now leading boys in all four tests set in the last year. All of this is made possible in a severely resource constrained school by an exceptional teacher.

The other nine finalists for the Global Teacher Prize 2019 were:

The original top 50 shortlisted teachers were narrowed down to ten finalists by a Prize Committee.  The winner was chosen from this ten by the Global Teacher Prize Academy. All ten finalists were invited to Dubai for the award ceremony at the Global Education and Skills Forum (GESF), where the winner was announced live on stage in a red carpet gala event.

Further information about the top 10 finalists is here: http://www.globalteacherprize.org