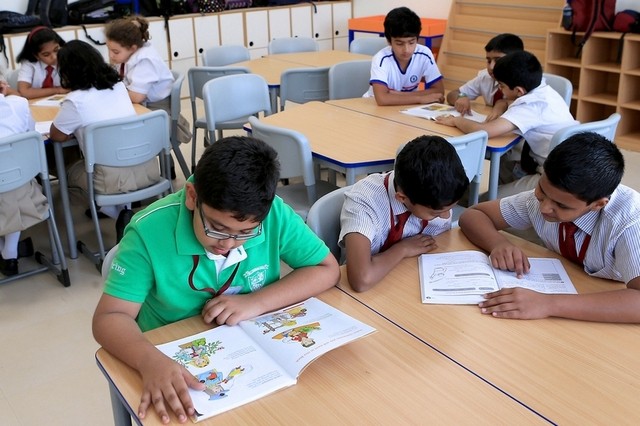 Dubai is spending more than US$45 billion on a new airport and another $2.9bn for a theme park. Then there’s $6.8bn to put up the world’s largest shopping mall.

But on schools for children of the expatriates who account for most of the city’s 2.3 million people? That’s where Blackstone Group, the world’s largest manager of alternative assets, comes in.

Investors are seeking to profit from the mismatch between educational supply and demand.

Dubai’s schools need $1.5bn of private capital by 2020, according to Ashwin Assomull, a partner in Mumbai for the Parthenon Group, a London-based management consultant. The emirate needs 110,000 new school places by 2020, an increase of almost 50 per cent, or about four to five facilities a year.

“Dubai realises that the only way it can bring in expats to grow the economy and compete against places like Hong Kong and Singapore is by making sure it has a first-class education system,” Mr Assomull said.

Dubai ranked below Bahrain, Qatar and Oman as a destination for expatriates because of rising living costs and expenses related to raising children, according to a survey this year by HSBC Holdings.

Blackstone joined a group that invested in Gems Education, a Dubai-based school operator that also has schools in the United States, United Kingdom, India and Singapore. The US private-equity company in October partnered with Fajr Capital, also based in Dubai, and Bahrain’s sovereign wealth fund Mumtalakat in the October deal, whose value wasn’t disclosed.

“Education is a good sector for private-equity investors as the barriers to entry are quite high and you get paid the fees upfront,” Mr Assomull said. “Once enrolled, the majority of students will stay with you for several years, meaning you have a lot of long-term visibility over your cash-flows.”

Marie-Helene Couture, a Canadian expatriate, felt like she won the lottery when her daughter got a place at Safa Community School in the Al Barsha area of Dubai.Ms Couture registered her three-year-old at five schools to secure a place, with most charging a non-refundable registration fee of Dh500, plus another Dh1,000 to assess the child. “If my husband’s employer didn’t pay for school fees, we couldn’t afford to live here,” she said.

Fees at Gems World Academy start at about $15,000 for three-year-olds, rising as high as $27,000, making it the most expensive school in Dubai. That compares with about $30,000 for some of the top schools in Singapore and an average of about $20,000 a year at private schools in the US, according to the National Association of Independent Schools in Washington.

As new schools compete for customers, flashy establishments rising out of the desert offer high-tech embellishments.

Students at Gems World Academy will learn about the universe in a 70-seat planetarium that can project a three-dimensional star field onto the ceiling powered by a custom-built computer system. Music rooms come equipped with Steinway pianos. There’s also a robotics lab.The academy, the company’s flagship school, cost Dh250m to build. Gems spends between $100m and $200m a year on capital investment for growth in the UAE, said Nick Guest, the company’s chief financial officer.

“We expect this to continue, and in addition we also have discussions with property developers and investors where they build and fund the physical infrastructure to our specifications,” he said. “We then occupy on long-term leases.”

Investors also see the opportunity for companies such as Gems to expand throughout the Middle East and beyond.

“The education sector in the region is set to be worth $96bn by 2015, and this is only likely to continue to increase,” said Mahmood Al Khooheji, the chief executive of Mumtalakat. The GCC states are “expected to attract education investments worth $150bn in the next few years”.

Dubai’s private-schools regulator, the Knowledge and Human Development Authority, has been on roadshows to encourage name-brand institutions such as the UK’s Eton College and Harrow School to open there.

Reflecting the region’s boom and bust economy, there is always a risk of a bubble. This year 11 schools have opened, adding about 23,000 places, according to Abdulla Al Karam, the regulator’s director general.

“This has been a game changer,” said James Mullan, who runs Which School Advisor, a Dubai-based company that counsels parents on admission.

“Until now there has always been a scramble,” he said.

“Now parents are beginning to have a choice, and as a result we are seeing some schools starting to introduce discounts in order to fill classrooms.”