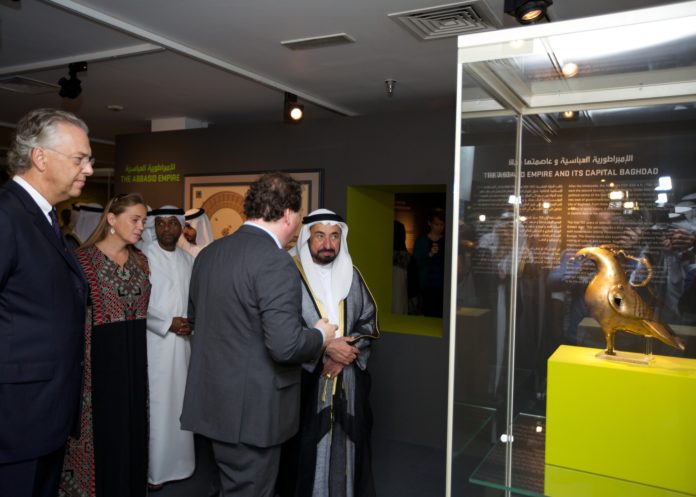 His Highness Sheikh Dr. Sultan bin Mohammad Al Qasimi, member of the Supreme Council and the Ruler of Sharjah, opened this evening the exhibition entitled “Early Capitals of Islamic Culture – The Artistic Legacy of Umayyad Damascus and Abbasid Baghdad (650–950)”, held in celebration of Sharjah as a Capital of Islamic Culture 2014. The exhibition is held in collaboration with Berlin State Museums and Goethe Institut.

His Highness was given a guided tour of the exhibition, and a detailed explanation of over 100 exhibits and artifacts brought from the Berlin Museum of Islamic Art, dating back to the Umayyyad and Abbasid caliphates eras, which had their capitals in Damascus and Baghdad, respectively.

Visitors will be able to immerse themselves in the ancient urban legacy of these two famed cities and explore fascinating archaeological items from Umayyad desert castles and perhaps the most famous of early Abbasid capitals outside Baghdad, Samarra. The exhibition will also focus on the cultural networks that emanated from Umayyad Damascus and Abbasid Baghdad.

Commenting on this monumental exhibition, Manal Ataya, Director General of Sharjah Museums Department remarked: In its dynamic, tolerant and groundbreaking outlook, fostered by a visionary leader, Sharjah shares many characteristics with the earliest cultural centres of the Islamic world. It is this fact that makes the exhibition from the Museum of Islamic Art in Berlin a befitting highlight in our celebrations of Sharjah as this year’s cultural capital. At the same time, we are delighted that our German partners should again be at our side on this occasion, after having been the first – as early as 2008 –to contribute an exhibition – The Radiance of Islamic Art – after the opening of the Sharjah Museum of Islamic Civilization’.

At the same time, the artifacts shown chart the fascinating transition from the pre-Islamic civilizations of Byzantium and Sasanian Iran to a new pan-Islamic civilization. They furthermore reveal glimpses of the dynamic complexity of cross-cultural relations between the ruling elites and the rest of the world during the earliest evolution and expansion of Islamic culture.

In order to achieve those objectives, the artifacts are not only placed in chronological and thematic order but are part of a wider story that gives a historic overview of urban, architectural and artistic developments as well as highlighting the transfer of knowledge and artistic traditions between cultures and civilizations.

Professor Dr Stefan Weber, Director of the Berlin Museum of Islamic Art said, “We are very happy and proud to be invited as participants in Sharjah’s celebration as Cultural Capital 2014. The Early Islamic Capitals exhibition is very important to us as for the first time ever in this region, an exhibition focuses on the beginning of Islamic Art in the framework of ancient cultures. Moreover, this exhibition – together with a series of professional development workshops this year – is a direct result of our comprehensive Memorandum of Understanding with Sharjah Museums Department and the German Goethe Institute, signed in 2013. Berlin Museums and Sharjah Museums have been friends for many years now, and this exhibition is our latest joint achievement.”