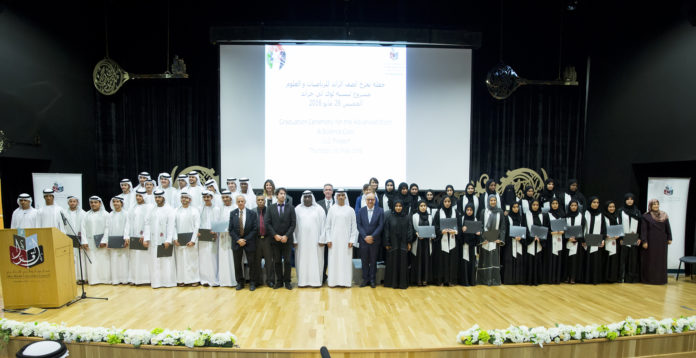 The graduates included 23 girls from the Al Mawaheb Girls School and 18 boys from the Al Ittihad Boys School, who have been initially selected and shortlisted from across four different schools based on their semester grades in English, Mathematics and Science, two rigorous academic screening tests and an interview.

The ADEC LLG project, now in its 8th year, is based on the curriculum followed by French students at the LLG in Paris, which is accredited by the Ministry of Education and adapted in accordance with ADEC’s educational norms and standards applicable for Emirati school students.

During his welcoming speech, His Excellency Hamad Al Dhaheri, ADEC’s Private Schools and Quality Assurance (PSQA) sector’s Executive Director, explained that the LLG was initially contacted to develop and oversee the creation of the Advanced Math and Science Class for Grades 10, 11 and 12.

“Based on the directives of His Highness Sheikh Mohammed Bin Zayed Al Nahyan, Crown Prince of Abu Dhabi and Chairman of the Abu Dhabi Education Council, this prestigious French scientific class, was initially established to offer unique education opportunities for gifted and talented Emirati students following the success of the Paris-Sorbonne University (PSU) in Abu Dhabi, launched in 2006,” said Engineer Al Dhaheri.

The project, which was launched in September 2008, initially took off with a class of 20 girls and 20 boys, who studied in Grade 9 at one of the four Cycle Two Model schools in Abu Dhabi (Al Mawaheb, Al Ghazali, Al Ruwwad and Al Suqoor).

“Students have been studying Maths, Physics and Chemistry in English for the past three years by specially selected French teachers according to the French Lycee Louis le Grand curriculum. I am proud to announce that many of those top performing students have been offered scholarships abroad and within the UAE,” explained ADEC’s PSQA Executive Director.

Several of the graduating students have shown keen interest in the new Pre-Engineering Physics course offered at PSUAD commencing this September and have already submitted enrollment applications.

“The ADEC LLG Class of May 2016, you should all feel self-accomplishment and pride today, for you and your peers in the classes before you, continue to set the par as highly qualified Emirati youth with a positive attitude, one that will help contribute to the success of our future workforce. Well done and best of luck in your future endeavors, I look forward to hearing about each and every single one of you,” concluded Mr. Al Dhaheri.