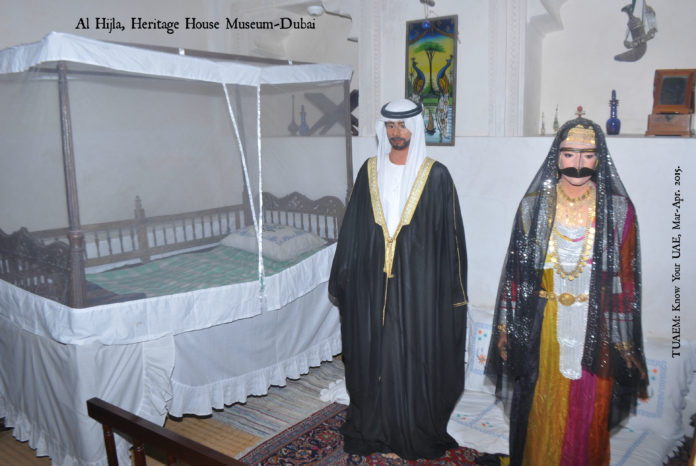 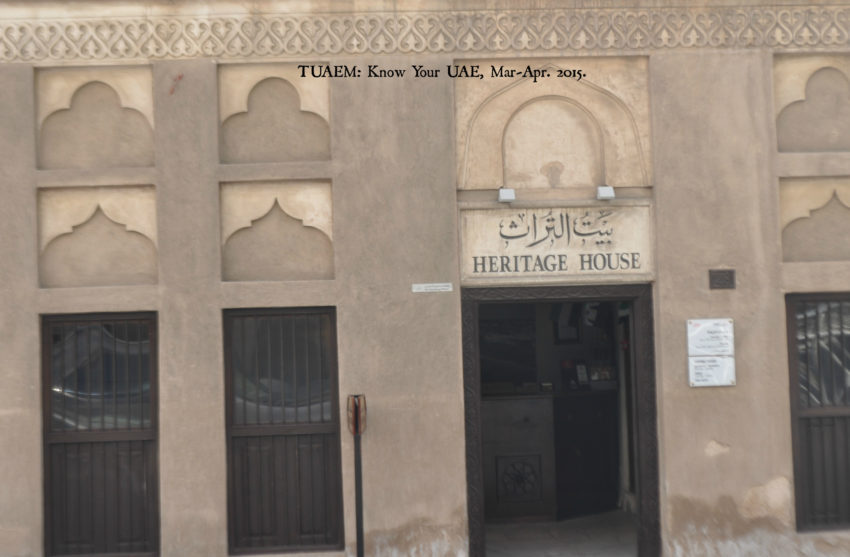 When one thinks of the vibrant city of Dubai the images that immediately come to mind include; that of spectacular architecture, numerous high-rise buildings and some of the world’s best tourist attractions. Dubai has the enviable position as one of the world’s fastest developing cities, rich with innovative accomplishments. This is evident in the numerous world records that the city now holds, but take a closer look and hidden among the glitz and glamour of Dubai are some real historic and cultural gems.

Teach UAE magazine visited some of the historical sites in Dubai that reflect its poignant history and intriguing cultural practices.

One gem hidden in plain sight is the Heritage House Museum, which dates back to the 1890s. Owned by Mattar bin Saeed bin Muzaauna, the original house consisted of two bedrooms overlooking a large courtyard. In 1910, ownership was transferred to Sheikh Ahmed bin Dalmouk who was the most famous pearl merchant in Dubai at that time. He extended the house, adding more rooms on the north and west sides of the building.

By 1920, Mohamed bin Dalmouk gifted the house to Saaed bin Hamdan and he kept it for fifteen years before Ibrahim Al Said Abdullah purchased it. Ibrahim made modifications to the house, which resulted in it becoming one of the best examples of a traditional Emirati family home.

The Dubai Municipality carried out restorative and repair work over the period of 18 months. On march 20, 2000, HH Sheikh Hamdan bin Rashid Al Maktoum officially inaugurated the house as a heritage site. The Department of Tourism and Commerce marketing assumed responsibility for the Heritage House in April 2000.

Below are some of the features of Heritage House which depicts traditional Emirati dwellings. 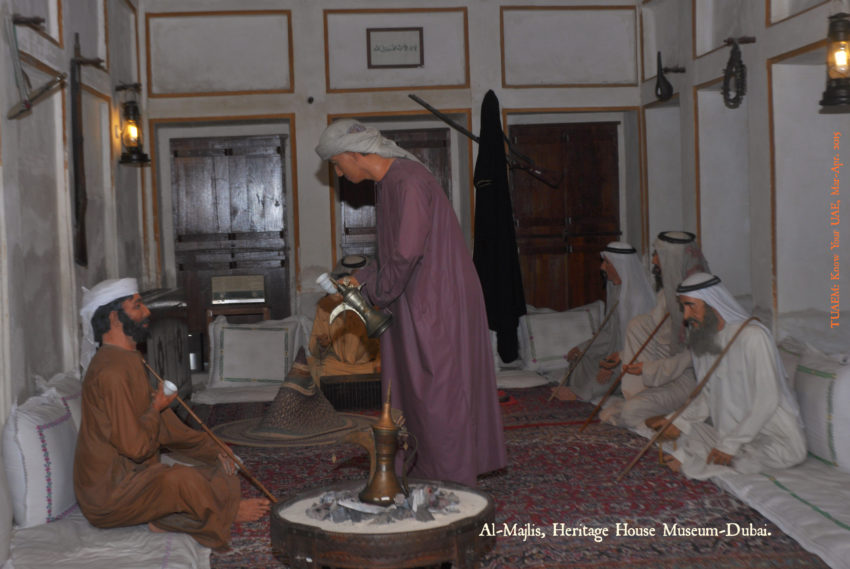 The Guest house or Al-Majlis

This is still considered the most important room in an Emirati house. The Majlis is usually situated near the main hall overlooking the entrance or a courtyard. It is completely isolated from the rest of the house with the exception of a door from which to serve food or drink. This is in keeping with Islamic traditions and family privacy.

The Majlis is usually spacious in order to accommodate many guests comfortably. Topics such as travel, trading, local politics, economics and social issues were often discussed there. Additionally, gatherings for occasions such as; weddings, holidays and feasts were commonly held in the Majlis. Arabic coffee is usually prepared and served from a corner of the Majlis. It was common practice for the walls to be decorated with verses from the Holy Quran, guns, swords and other weapons.

The lady of the house would host her female guests and offer them food and drink, incense and perfume as she entertained them with traditional Arabic coffee. Women accompanying male travellers would stay in this guest room overnight.

The floor of women’s Majlis was decorated with luxurious Persian mats atop straw mats Dawshak. Other decorative items included embroidered silk or wool pillows for guests to use. This room was completely off limits to men even if they were members of the family. It was a focal point of the house where women would meet, socialise and perform duties such as henna painting, knitting and embroidery. 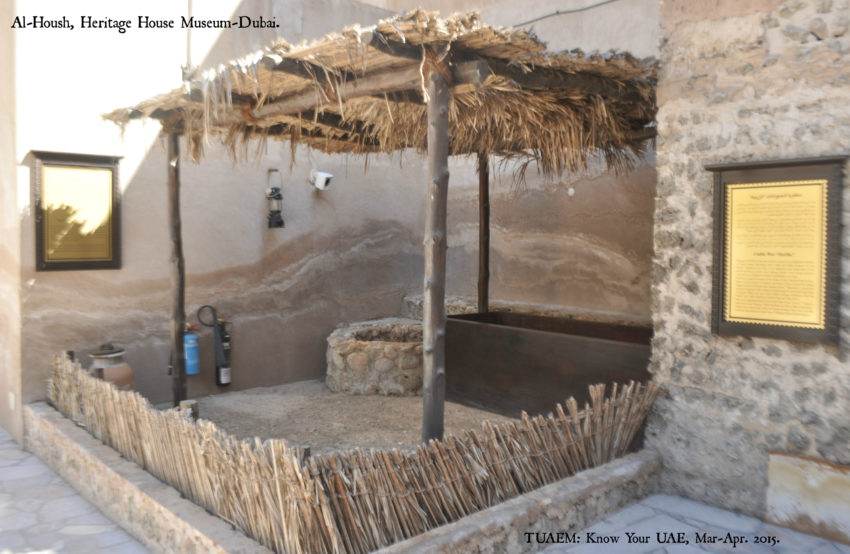 The courtyard is a common architectural feature of the gulf region including Dubai. It provides ventilation by allowing air to circulate through the house. All doors open in the direction facing the courtyard except those for the guest-rooms which face outward.

This area serves as the ‘garden’ of the house as date palm, Indian almond and sidar trees are planted there. It is also a play area for children. In some instances, animals and poultry could be found inside the courtyard of houses that contain no special space for the breeding of animals.

The Main Living Room or Al-Makhzan

Throughout the year, family members use this area for gathering, meetings and the sharing of meals. It contains all the private belongings of family members (clothing, perfume, jewellery). The Makhzan is very large and is covered with straw mats covered with Persian carpets, teak wood boxes for storing clothing, bedsteads made of sesemi wood with mattresses, bed sheets and blankets. The number of rooms varied in old houses according to the size of the family and wealth. In some houses the number of rooms would exceed 20 in order to accommodate the family of the father, his wife, married sons and unmarried children, some relatives and guests.

Average income families lived in houses made of palm tree fronds, which were covered in winter with tarpaulins to protect it from rainwater. 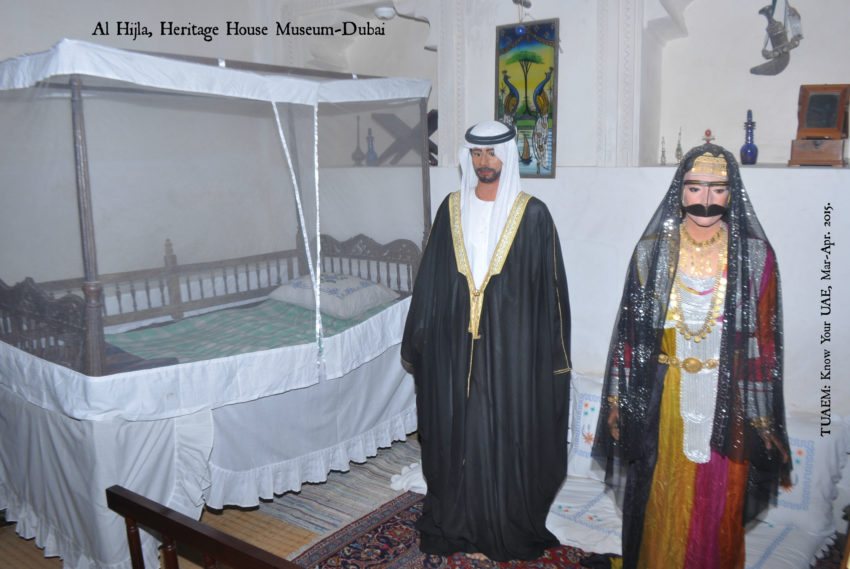 The Bride room or Al-Hijla

This room was prepared by women of experience such as the groom’s mother and other female family members prior to the wedding day. It is covered with bolsters and embroidered pillows, mirrors and Persian carpets are spread on a layer of straw mats on the floor.

The bride’s clothing consists of kandura (a dress in different styles according to the type of material), Serwal or trousers, shaila or headscarf and burqa, the face mask. The women also prepare the groom’s (Al Maaress) clothing. His clothing includes his Kandura or national dress, bisht or cloak and headdress. The headdress has 3 parts; ghuttra, which is usually a piece of white cloth, the iqal, which is the black cord used to hold the ghaffieh (small white under cap) used to hold the hair in place.

These are just a few of the features that can be found at Heritage House. This historical gem is perfect for educational field trips and individual or family visits.

*All information presented on Heritage House was obtained on location in Dubai.