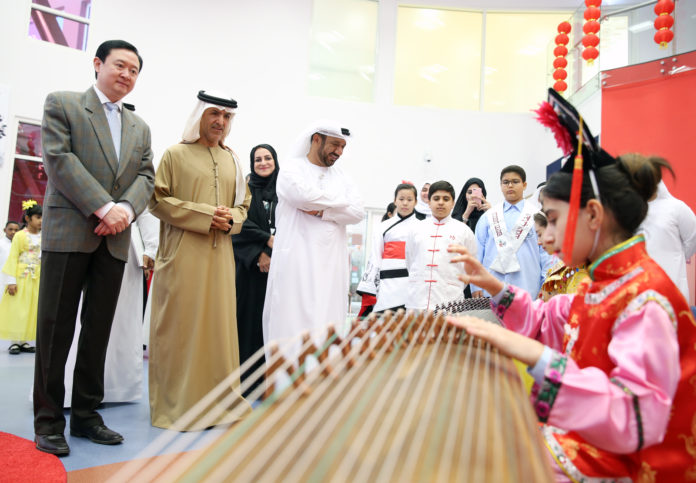 During his tour to the school, Dr. Al Khaili accompanied by the Chinese Ambassador to the UAE – His Excellency Chang Hua, alongside Mr. Mohamed Al Dhaheri, School Operations Executive Director, senior delegates from both ADEC and the Chinese Embassy, expressed his admiration towards the Chinese history, culture and heritage. H.E. was happy to witness a successful example of how both countries work well together when speaking with students at the Hamdan bin Zayed School in Abu Dhabi.

Upon entering the school’s hallway a Chinese musical show went on, where different Chinese arts and crafts, musical instruments as well as Kung Fu and the Chinese Qi-pao clothing were displayed. Alongside were flags, symbols, arts and crafts of the UAE, showcasing its magnificent history and culture.

Throughout his thorough tour across the school, Dr. Al Khaili spoke to students and teachers in classrooms, the learning resource center, music class, swimming pool area, and gymnasium’s (one of which is dedicated to Jiu Jitsu).

Emirati students spoke to his Excellency in Arabic, English and Chinese, while Chinese students spoke in colloquial Arabic language to showcase their cross cultural language skills acquired from the schools tri-lingual curricula.

In his conversation with the Chinese Ambassador, Dr. Al Khaili emphasised ADEC’s mission to prepare its youth to take part in diversified and competitive job opportunities in the future that will help drive the economy forward and lauded efforts exerted at the Hamdan bin Zayed School where students from KG to Grades 8 are currently studying three different languages, Arabic, English and Chinese.

The Hamdan bin Zayed School, previously known as the Al Mushrif Chinese School, is the first school in Abu Dhabi to offer trilingual languages to both Emirati and Chinese students, and amongst the first schools to implement the Abu Dhabi School Model and encourage a mixed gender classroom setting.

The school has been re-allocated to a larger premises based on student and parental demands to expand, therefore offering further seats for kindergarten to Grade 12 students. The first batch of students entering the school in 2006 are currently studying in Grade 8 and will be the first to study at the newly inaugurated Grade 9 next year. Classrooms for Grades 10, 11 and 12 are already available and ready to accommodate the school’s first batch of students throughout the years.

Mr. Hua commended Dr. Al Khaili and ADEC for the tremendous effort exerted in reforming the education system across all schools in the Emirate of Abu Dhabi. He also lauded the Emirates ambitious goal in graduating a competent and reliant workforce of youth, which reflects the keenness of the UAE’s prudent leadership to qualify and prepare graduates to take part in various disciplines efficiently.