Most of us educators value our vacation time. I like to use mine to do a bit of travel and exploration. A little over three and a half hours away from the UAE is the country of Georgia. Despite being so close to the Arab region, it is a world away from our UAE lives. Though not landlocked the country shares borders with four other nations (Turkey, Armenia, Azerbaijan and Russia) with the Black Sea to the west.  I decided that Georgia would be a good place to relax and get a bit of exploring done with my travel partner.

From Dubai, entry into Georgia was through the airport in the capital city of Tbilisi. Being a smaller international airport, there was very little hassle passing through immigration and customs. My travel partner and I were able to get a visa on arrival. I recommend that you check the visa requirements beforehand on www.visahq.com.  It was obvious that the country is in the early stages of touristic development as the airport, though fairly modern, lacked the signs and shops that usually whet the appetite of the average tourist. This for me was a good omen. It heralded the start of trip that was to be more culturally authentic.

The centre of Tbilisi is about 30 minutes away from the airport. If you don’t have prior arranged airport transfers; just take a taxi. There are taxi drivers just outside the immigration exit who eagerly await the chance to ferry tourists to the city. The taxis are metred so ensure that the driver turns on the metre before taking off. 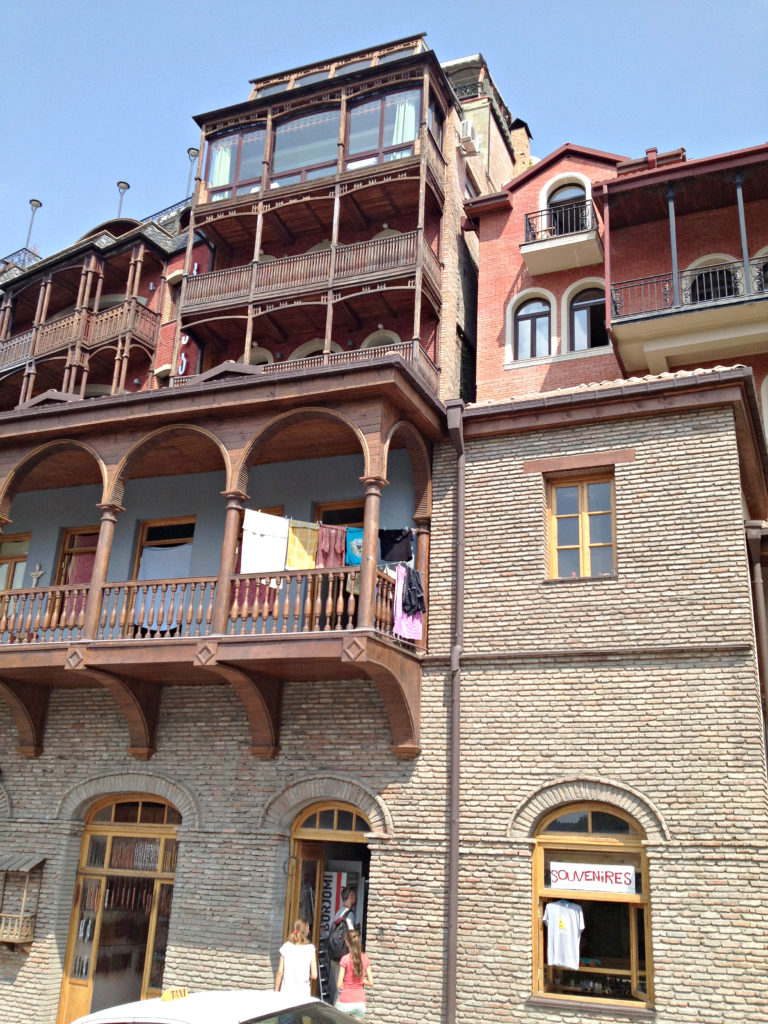 The ride from the airport gave me the feel of being in an 80s Cold War movie, as we passed a couple monuments and what looked like social housing estates. The closer we got to town, the more the old world charm emerged. For me the first, most striking feature of these was the river with the residences built right to the edge of the cliff that ran the length of it. The city itself is quite small and can be explored in a day. However, you might decide to do it more justice and go at a more leisurely pace. In order to soak up as much of the city as possible, give yourself 2-3 days. It’s easy to walk everywhere. If you decide not to, again, taxis are readily available. One taxi driver told us that we should not expect to be charged more than 5 laris (the Georgian currency).

The country is mainly Christian with most following the Georgian Orthodox Church; as such, there are many old churches to explore. The architecture of many of these is stunning. It helps that the city is making attempts to preserve their history and beauty. Even if you are not Christian, once you step through the doors you will find an air of mystery and wonder that can only be found in ancient places of worship. Be sure to dress appropriately before entering these places of worship.

A great way to start day one is to take the cable car up the mountain to see the freedom statue. The panoramic views of the city from that vantage point are breath taking. We went in the summer so the lushness of the terrain was wonderful to see especially coming from the UAE. From there, you can make your way slowly downhill towards the ruins of the old fort. The fort was a necessity in ancient Georgia as the nation fell under the rule of at least four sets of invaders over the course of its history. The fort itself lends a fantastic view. I imagined myself being a lookout trying to spot signs of invaders.

At the bottom of the hill lies the hub of the city. Our guide described it as Tbilisi’s equivalent of London’s Soho. Café culture is just starting to take off in this area. There are many restaurants offering a variety of international cuisine, however, I would highly recommend trying Georgian food. The best way to describe Georgian cuisine is ‘unpretentious’. It has yet to be greatly influenced by the palates of foreigners. Every meal seems to be served with lovely rustic Georgian bread, while meat is a major feature of most dishes. Our guide suggested we try the boiled dumplings, which are a local specialty. The dumplings resemble steamed wontons but with a thicker casing. They can be quite filling on their own. Another speciality is kachapuri, a type of inside out pizza without the tomato sauce. Vegetarians will love the breads, cheeses and tomato and parsley salad. My friend and I tried many local dishes while we were there. We enjoyed it all. By the way, tipping is not a big practice here so if you want to, just leave it on the table as you go.

Georgians are proud of their wines and rightly so. They have maintained the old method of wine production on many of their wine estates. I’m no connoisseur but all the wines I tasted were easy to drink and as with the food, unpretentious. They went down well with the meals that we had. One special treat my friend and I had was receiving homemade wine from our tour driver. He brought us a 2-litre bottle of his home brew. We (mostly me really) enjoyed it over the course of our short trip. Thankfully he gave us some to take home…which brings me to the people.

Georgians are just lovely! The people I encountered made my experience quite enjoyable. I was always on the alert for a tourist trap to be sprung on me at some point. Everyone was kind and helpful from the start. No one tried to take advantage of us and if they did I’m unaware of it. People seemed honest and genuine with us at each point of our journey. This was refreshing as oftentimes tourists can be preyed upon when not alert. I would recommend a trip to Georgia because it is a wonderful getaway that offers relaxation, delicious cuisine and a bit of adventure.

Here are a few other tips to make the trip that more memorable:

I really enjoyed my time in Georgia and hope to go back for a longer visit. On my next visit, I will venture further afield to see the coast and perhaps cross the border to one of the neighbouring countries. I recommend that travellers go there sooner rather than later so as to experience unspoilt Georgian culture.