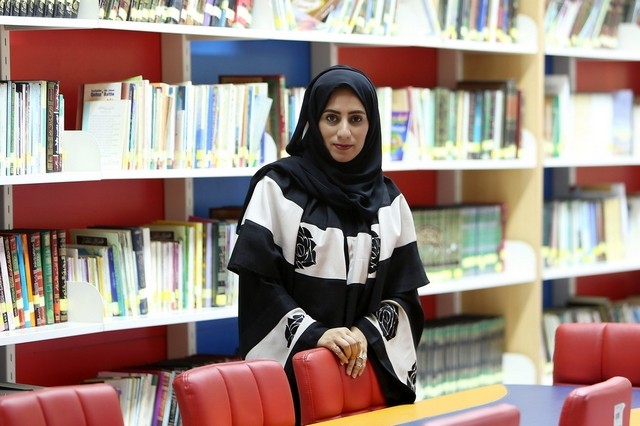 The librarian at Sharjah Wasit Model School has been serving education for more than 22 years and still has the spirit to give more.

Muna Al Matroushi, 41, changed a shop into a modern library and cultural cafe.

She was honoured by Sheikh Mohammed bin Rashid, Vice President and Ruler of Dubai, for being one of few women who exceeded the expectations of the federal Government’s performance management system.

She calls herself a workaholic who loves education so much she has not strayed from it since she was 18.

“To stand out in what you do you need creativeness and a supportive environment, although you would work and work sometimes but would occasionally feel you are alone,” Mrs Al Matroushi says.

“I don’t wait when it comes to work, I lay down ideas and I chase them. I visit cities and look for different and advanced experiences in the educational field to benefit from.

She started teaching at a school in Ajman, where she taught classes in all subjects. She was 18 and had just done two years at the Educational Training Institute after leaving school at 16. “I was the youngest teacher,” Mrs Al Matroushi says.

The school at which she started was just a few caravans for the first seven years. Her starting wage was Dh5,800 a month but she was not in it for money.

She would stay at work until 10pm at times, sometimes paying out of her own pocket to cover expenses.

Years later, in 2009, she became the head of the library at Wasit.

Mrs Al Matroushi saw that many pupils had abandoned reading as a hobby, and decided to change that.

She turned a space where books lay idle in boxes into a magnificent library. There was no budget, but that did not discourage her as she made a deal with a carpenter to pay him in instalments from her own pocket.

But when the fruits of her labour became visible, she received the finances she needed from the school.

Mrs Al Matroushi painted and widened the library before, in 2012, building a glass cafe that she called the Cultural Cafe, which overlooks the school playground.

She says her son Rashid, 11, shares her love for the old and unique. In what spare time she has, Mrs Al Matroushi designs clothes and helps with costumes for school activities.

She plans to open her own shop after taking part in a Dubai bridal show, and a sketching course.