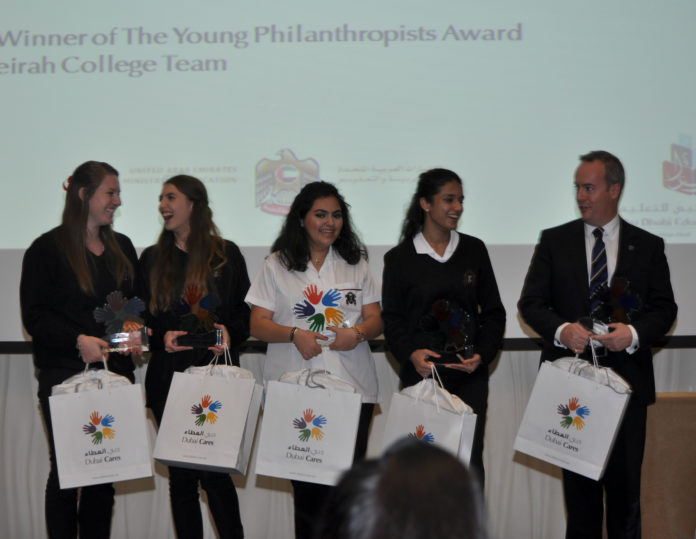 The event celebrated the philanthropic work of students across the seven Emirates who participated in the Distinguished Philanthropic Award in Schools Initiative.

On Thursday, February 11, 2016, Dubai Cares rewarded the winners of the Distinguished Philanthropic Award in Schools Initiative.

“This is an initiative that is run annually, that focuses on mobilising schools to unite. The aim is for them to find creative ways to raise funds which go towards providing children with access to quality education globally. The objective of this initiative is to instil a sense of philanthropy and entrepreneurship in children at a very young age,” stated Ms Amal Al Redha, Director of Fundraising at Dubai Cares.

The event, which was held at the Jumeirah Creekside Hotel, saw a packed auditorium of excited participants from a number of public and private schools across the Emirates. Among the attendees were key collaborators representing the various education bodies of the UAE, UAE Ministry of Education, Knowledge and Human Development Authority and Abu Dhabi Education Council.

Commenting on their first place win, Akil of GEMS the Millennium School, Al Qusais said; “I would like to thank Dubai Cares for this amazing initiative because they inspired each school that was present here today. What I learnt most throughout the process is that there are people who aren’t as privileged as we are. We have to do the best that we can to help others and that’s the best change that we can create in this world.”

This was a similar theme among his teammates who also lauded Dubai Cares, their principal, teachers, team members and school community for their support.

Other key lessons that the students shared included the challenges of fundraising and the importance of getting the job done. Students also noted that helping others was not only important but also rewarding.

The ceremony held many surprises for participants such as a surprise trophy awarded to ADNOC Schools, Females Branch, Abu Dhabi, for raising the most funds proportionate to the number of participating students, the latest MacBook Air was awarded to each team member of the GEMS Jumeirah College and thirty iPads to the IT lab of the GEMS The Millennium School, Al Qusais.

Dubai Cares also acknowledged all participating schools by presenting them with certificates of participation and thanked them for their great effort and creativity through their ideas that provided support for the organisation’s mission.

In sharing her thoughts on the success of the initiative and the ceremony, Ms Al Redha concluded, “We were happy with the overwhelming support that we received this year. We had over 82 schools that participated. During the ceremony today, we witnessed just how proud the students were of what they had accomplished. The teachers were also very engaged in the process. We hope that this initiative will encourage them to participate again in the years ahead.”

Why Are Teachers The Drivers Of A Sustainable And Prosperous Future For All?