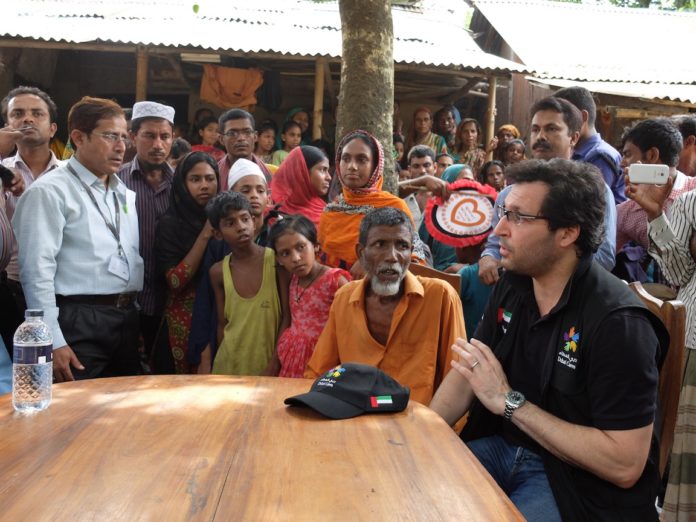 Dubai Cares, part of Mohammed Bin Rashid Al Maktoum Global Initiatives, announced today the construction of a new secondary school in Bangladesh to honour the memory of Sufia Akter who died saving the lives of four young Emirati boys in October 2014. This announcement comes as a result of the directive of His Highness Sheikh Mohammed Bin Rashid Al Maktoum, Vice President and Prime Minister of the UAE and Ruler of Dubai given immediately to Dubai Cares after her unfortunate death.

Sufia was a Bangladeshi nanny who lived in the UAE and tragically died on October 24, 2014 while bravely saving the lives of four young Emirati boys from drowning, two of whom were in her care and aged between six and ten. Sufia rescued the boys from the strong waves and managed to pull the children to safety. Sadly during the rescue, she was swept out to sea. Despite the bold efforts of her employer, the father of two of the children, who jumped into the water in a bid to save her, Sufia drowned and passed away before the arrival of the emergency services.

Since the directive of His Highness Sheikh Mohammed Bin Rashid Al Maktoum in October 2014, and in response to this tragic story, Dubai Cares has been campaigning, with the support of the UAE Embassy to Bangladesh and the Embassy of Bangladesh to the UAE, as well as several non-governmental organizations and government officials, to honour Sufia’s bravery with an education project in Bhata Para, the village where Sufia was born and raised, and where her family still reside. After extensive consultation with BRAC, Bangladesh’s largest NGO and a trusted partner of Dubai Cares concerning the educational system and opportunities for development in Bhata Para, as well as conducting field visits to Sufia’s village to choose a land for the new school, Dubai Cares has unveiled its plan to construct and support the secondary school.

10 May 2016 marked laying the foundation stone and the commencement of the construction of the new secondary school, the only one of its kind in Sufia’s village, which will provide education to children, particularly young girls, living in the village of Bhata Para in the Sunamgonj district of Bangladesh. Dubai Cares will also fund the school’s operational costs for 5 years post the completion of construction. The six-year intervention will generate both immediate and long-term benefits for the community of Bhata Para, especially young girls who cannot afford to continue their education.

Discussing the importance of the school construction and support during his visit to Sufia’s village, Bhata Para in Bangladesh to lay the foundation stone, Tariq Al Gurg, Chief Executive Officer of Dubai Cares, said: “Out of the devastating tragedy of this story comes great hope; the construction of the secondary school in Sufia’s village Bhata Para in Bangladesh by Dubai Cares will forever be remembered as a symbol of the courage of Sufia. For the first time, children in Sufia’s village will have access to secondary education and by the sixth year, the school will be entirely self-sustained. This will be of demonstrable benefit to the long-term career prospects of children living in Bhata Para, particularly young girls who have previously been denied equal access to education due to monetary, societal and cultural barriers. Through this school, Sufia’s legacy will live on through at least a generation of educated and inspired young boys and girls in Bangladesh. We decided to name the school after Sufia to express our deepest gratitude for her sacrifice.”

H.E. Dr. Saeed Bin Hajar Al Shehi, Ambassador of the United Arab Emirates to the People’s Republic of Bangladesh said: “The UAE has achieved an advanced position globally in the field of philanthropic and charity efforts. It is a highly generous humanitarian gesture of His Highness Sheikh Mohammed bin Rashid Al Maktoum to give his directive to Dubai Cates to establish a school in the village of Bhata Para in Bangladesh, the birthplace of nanny Sufia Akter. This humanitarian initiative will undoubtedly contribute to strengthening bilateral relations between the United Arab Emirates and the People’s Republic of Bangladesh along with serving the common interests of the two countries.”

Dubai Cares effort in Bangladesh will be implemented in partnership with BRAC, reaching more than 3,200 children across six years. The proposed school will start functioning initially as a Junior Secondary School by providing education for classes 6 to 8. After three years, the school will turn into a fully-functional secondary school which will also provide education for children in grades 9 to 10. By year six, the secondary school will be self-funded to provide a sustainable educational resource for the children of Bhata Para and the surrounding areas.

To supplement the construction of the school, Dubai Cares will also allocate funding for purchasing and installing school furniture and equipment, and supporting the cost of teacher salaries and school maintenance. In addition, Dubai Cares will offer practical management support based on the organization’s extensive experience in implementing educational programs in developing countries.