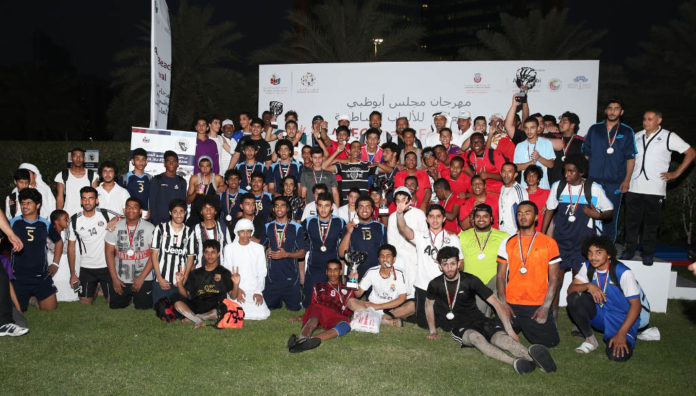 The Abu Dhabi Education Council (ADEC) concluded its ‘Beach Festival 2015’ on a high note, with an active participation of 90 male and 50 female high school students from Abu Dhabi, Al Ain and the Western Region.

The festival was staged as part of the ‘Champions of Tomorrow’ initiative. During the event, students showed a strong performance, high competitive spirit and good sportsmanship in various sports competitions such as beach football, beach volleyball, tug of war, swimming and beach tennis ball.

The festival, which attracted some of the country’s most promising young individuals, yielded fruitful results aligned with the UAE’s aspirations of establishing a strong sports industry through rigorous training of an existing and promising pool of athletes who will represent the country in regional and international tournaments.

Mr. Mohamed Salem Al Dhaheri, ADEC’s School Operations Executive Director said: “The ‘Beach Festival 2015’ is part of our initiative to select the most promising young athletes and develop their skills. The outstanding performance shown by the participating students underlined the importance of providing the young generation with significant opportunities to improve their skills and eventually make them at par with our professional athletes. The opportunities will pave the way for the country to achieve positive results and carve a niche in the local and international sports arena.”

“We organised the festival as a demonstration of our ongoing commitment to discover new talents among our students, refine their skills, and motivate them to be more creative and innovative so that we can build a team of champions who are able to take part in the global sporting stage. Aside from sports competitions, we also held a diverse range of educational and entertaining activities to enrich the participants’ knowledge and improve their leadership, social and fitness skills. The festival’s goals were aligned with the objectives of the ‘Champions of Tomorrow’ initiative, which focuses on the role of schools in shaping the athletic skills of our students so they can successfully compete in international platforms,” added Mr. Al Dhaheri.

ADEC’s School Operations Executive Director concluded: “The event’s success motivates us to continue to work hard and organize more sports tournaments that will instill a culture of fair competition and good sportsmanship among students. It will also highlight the importance of sports and pave the way for emerging talents to achieve excellence at the local, regional and global levels.”

ADEC’s ‘Beach Festival 2015’ also featured other games such as jiu-jitsu and beach basketball as well as other recreational activities, including artistic and heritage performances. It also included educational events to promote healthy lifestyle and highlight the importance of protecting the beach from waste and pollution.

The ‘Champions of Tomorrow’ initiative strives to raise sports awareness among students and reinforce the role of schools in nurturing their athletic skills. The initiative includes a series of sports competitions held in four categories, namely the mandatory games (football and athletics), individual games (swimming, gymnastics, fencing and judo), complementary games (handball, basketball and volleyball), and special competitions such as racing and cycling.