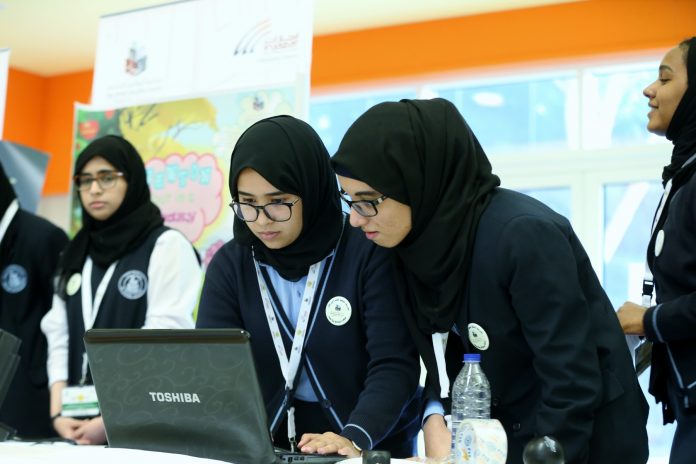 The “Program Your Idea” competition is coming back with a second round this year after its initial success. However this time, the competition includes both public and private school students. As it is part of Abu Dhabi Education Council’s (ADEC’s) programming for life innovation initiative to transform creative ideas among all students into reality through programming.

The “Program Your Idea” competition runs from April 9th to May 18th 2017, and is managed by ADEC in collaboration with Injazat Data Systems (Injazat), a Mubadala owned company.

The programming competition is an opportunity for students across Cycles 1, 2 and 3, to apply their innovative thinking and learning skills and create a variety of applications including, but not limited to, educational games, science and cultural apps, mobile and web-based tools.

Speaking of the objectives of last year’s competition, more than 370 prizes were awarded among the winning teams. The whole winning team, including students and teachers, were awarded for their efforts throughout the competition. The winners not only received prizes but were also given the opportunity to present their creative work in international summits such as at the GESS Dubai 2017.

Highlighting the objectives behind launching the competition, Dr. Yousif Al Sheryani, Advisor to ADEC’s Director General and Acting Executive Director for the Office of Planning and Strategic Affairs in ADEC, said: “The aim behind the competition is to create a platform to motivate students to participate in Science, Technology, Engineering, Arts and Mathematics (STEAM) related fields, while tapping into each student’s natural passion for creative thinking, enthusiasm for programming and technology as part of 21st century learning and teaching skills.”

Students will be required to develop projects in a format of a game or an application. Top performing projects will be evaluated based on seven criterias, namely: those that are linked to STEAM, quality of artwork and media, originality of the project, code structure and flow, creativity in the project, completeness of the project and presentation of the project.

Khaled Al Melhi, CEO of Injazat commented: “Injazat is proud to once again support the “Program Your Idea” initiative in 2017. As we look to progress to an economy based on knowledge that will foster sustainable and long-term growth, it’s vital that educational programs, operated by our partners at ADEC, are delivered to the young talent of today, within Abu Dhabi based classrooms, who will become the future pioneers and leaders of tomorrow. Programming and coding are vital skills, with practical engagement with STEAM subjects critical to unlock potential in any student.”

Scratch is a student-friendly visual programming language developed by the world renowned Massachusetts Institute of Technology (MIT). By learning to program with Scratch, students will learn to think logically, work collaboratively, solve problems and reason systematically.

The Code-based open category provides an opportunity to those students who are programming enthusiasts and already developing apps for different purposes using any coding language. Students can demonstrate their ideas through any platform including, but not limited to, mobile apps, computer programs, games, web-based applications, programmed robotics, flash and multimedia applications.

Each team should consist of two to three students and a supervisor/teacher. All public and private schools are encouraged to participate in this competition for Scratch-based and Code-based open category. Schools may submit up to four projects based on the number of students in the school.

The number of projects to be submitted is based on the total number of students in a school. “Expected number of projects to be submitted is more than 1800 from public and private schools combined, where up to 7,000 individuals will participate in order to further increase the enthusiasm among students. The top ten projects in each category will be shortlisted – the top three will be awarded as 1st, 2nd and 3rd rank along with seven runner-up teams. Students, teachers and school leadership will be awarded based on their winning positions,” added Dr. Alsheryani.

As part of the award process, each category will consist of ten winning teams. Judges will select the top three projects in each category and rank them in 1st, 2nd and 3rd position on the final ceremony day, which will take place later this year.

Apart from earning trophies and medals, individuals from the top three winning teams in each of the four categories will receive high value prizes. Additionally, the runner-up teams will also be recognized.