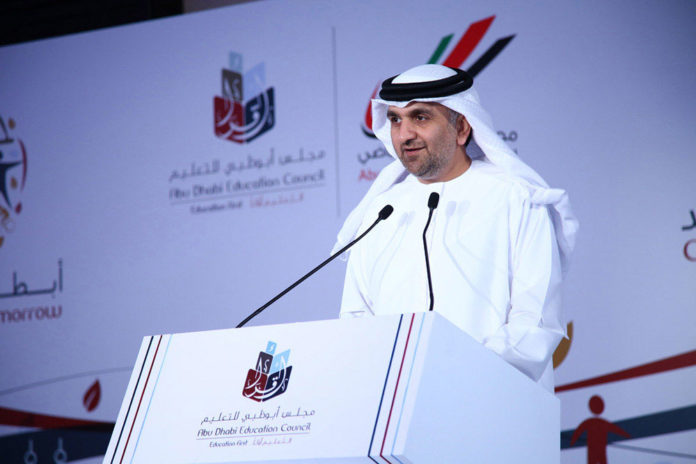 Campaign is across schools of Abu Dhabi, Al Ain and Western Region and aims to boost national talents to reach international levels

Abu Dhabi Education Council (ADEC) has unveiled the ‘Champions of Tomorrow’ campaign which is poised to be launched across the schools of Abu Dhabi, Al Ain and the Western Region as part of the efforts to boost the culture of sports amongst students and create a portfolio of distinctive athletes who can join national Olympics teams to raise the UAE flag in regional and international championships.

The announcement came during a press conference held today (Sunday, February 1, 2015) in Abu Dhabi Country Club, where H.E. Dr. Amal Al Qubaisi, Director General of the Abu Dhabi Education Council, emphasised the importance of this new sports campaign as a key milestone to lift school-based sports into a new level of excellence and professionalism.

Dr. Al Qubaisi explained that the ‘Champions of Tomorrow’ campaign primarily aims at transforming schools into a sports-friendly environment and building a new generation of talents in leadership, sports and fitness which enables them to contribute effectively to supporting the government’s efforts to promote Abu Dhabi’s and the UAE’s position on the international sports landscape.

According to H.E, the campaign represents a quality initiative to support the Olympic movement in the country and supplies the sports clubs with qualified skills up to the highest international standards, stressing on the importance of the campaign in promoting the role of schools as a sports base.

Dr. Al Qubaisi further pointed out that the sports campaign has social and educational dimensions as it aims to strengthen relations between schools, students, parents and the local society. The campaign is part of the ongoing initiatives to maintain optimal investment in human element as the cornerstone for building the development system in Abu Dhabi under the leadership of H.H. Sheikh Khalifa Bin Zayed Al Nahyan, President of the UAE, and the unparalleled support of H.H. General Sheikh Mohammed Bin Zayed Al Nahyan, Crown Prince of Abu Dhabi and Deputy Supreme Commander of the UAE Armed Forces, to encourage and bolster sports activities and programmes.

H.E pointed out that more than 50% of Abu Dhabi Education Council students from the public schools will benefit from the current campaign, which will kick off with 9 Olympic Games, with more games to be added in next year’s edition, which will target students from private schools also.

“The UAE continues to consolidate its footprint on the international sports landscape through the many individual and collective achievements of our champions who have had a strong presence in regional and international competitions. Through ‘Champions of Tomorrow’ campaign, we look forward to contribute in equipping national teams with promising talents which will enable them to reach highest international rankings and thereby raise the UAE flag up high”, Dr. Al Qubaisi added.

During the conference, Dr. Al Qubaisi unveiled the details of the sports day open for Abu Dhabi Education Council, noting that the initiative is the first of its kind for any government entity in terms of the allocation of an open day for the students, parents and teachers to communicate amid an atmosphere full of sportsmanship and fair competition. She further explained that the Open Day falls under the Council pursuit to add positive energy between the student and social community through sport.

H.E also announced the details of the Abu Dhabi Education Council Marathon, which will be hosted by “Yas Arena” on the 26th of February with the participation of 3000 students and the presence of parents and teachers.

She concluded by underlining ADEC’s commitment to make best of available competences to achieve objectives of the ‘Champions of Tomorrow’ campaign which serves as a key platform to encourage the promising athletes and pave their way towards representing the UAE in international events in the future.

For his part, H.E. Aref Al Awani, General Secretary of Abu Dhabi Sports Council, commended ADEC for the launch of this campaign which is developed to address the common aspirations for discovering, preparing and rehabilitating athletes in Abu Dhabi starting with early ages to ensure they reach advanced positions in regional and international championships. “We are upbeat towards the new campaign which comes in line with our efforts to achieve our strategic priorities for 2012-2016, aimed at promoting participation in sports events and achieving integration between all industry segments to build a healthy sports community that is able to meet the plans and objectives of the Government of Abu Dhabi”, Al Awani continued.

H.E. Mohammed Salem Al Dhaheri, Executive Director of School Operations at Abu Dhabi Education Council, commented: “The launch of ‘Champions of Tomorrow’ campaign complements our commitment to raise sports awareness among students, offer the right environment to embrace and sponsor athletes and provide them with the necessary tools to achieve excellence on the local, regional and international levels. IT gives us great honour to cooperate with Abu Dhabi Sports Council in organizing this campaign which offers an ideal platform to encourage the youth and supporting them to represent the UAE in international events in the future”.

‘Champions of Tomorrow’ campaign will include a series of sports tournaments to be conducted within four categories: ‘Mandatory Games’ comprising football and athletics; ‘Individual Games’ including swimming, gymnastics, duel and judo; ‘Complementary Games’ comprising handball, basketball and volleyball; in addition to other competitions and events such as racing, bicycling and the beach festival. Three awards will be given to the winning schools at the winner-announcement ceremony to be held during the summer festival at the end of this academic year.