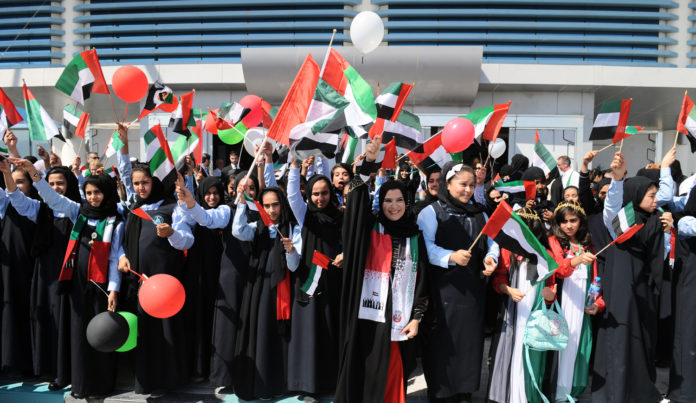 While raising the flag, students from across both public and private schools stood parallel to each other as they held balloons representing the different colours of the UAE flag.

Her Excellency congratulated all the students present for their efforts and patriotism.

Students who wore the UAE military uniform recited words from the UAE flag Oath during the event as they proudly marched in their uniforms and sang different Emirati nationalistic songs.

Once finished singing the national anthem, students let go of their balloons and all ADEC employees as well as members of the public witnessed the red, green, black and white balloons fluttering high in the sky around the ADEC headquarters building.

The event took place under the ADEC headquarters building today, Monday November 3rd 2014 at 12:00pm sharp. Before that time, different Emirati patriotic songs were being played as everyone was greeting and congratulating each other to mark the festive initiative.

The joyful event first started in November 3rd last year to celebrate the presidency of His Highness Sheikh Khalifa Bin Zayed Al Nahyan, who was elected President of the UAE on November 3rd 2004 may God protect him.

Raising the UAE flag on November 3rd in various entities across the UAE concurrently was initially a recommendation and suggestion by His Highness Sheikh Mohammed Bin Rashid Al Maktoum, the UAE Vice President, Prime Minister and Ruler of Dubai.

In order to ensure uniformity of the UAE flag across the UAE, ADEC sent circulars one day prior to the event to all private and public schools across the Emirate of Abu Dhabi, requesting them to raise the UAE flag and salute it at the same time and date, Monday 3rd November at 12:00pm.