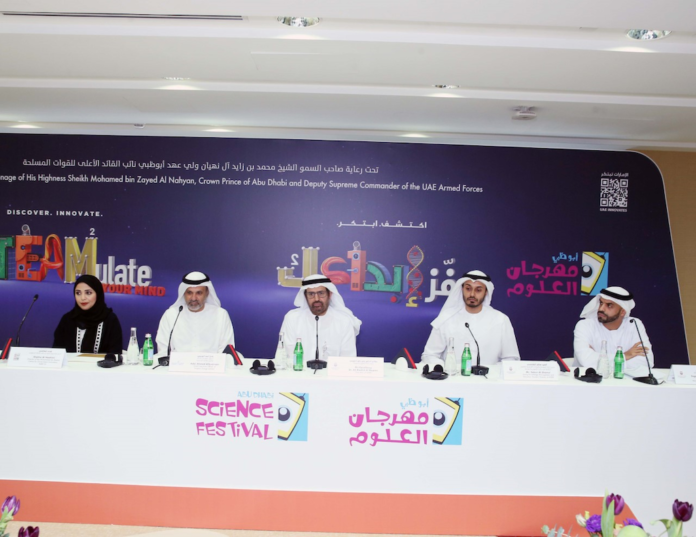 Under the patronage of His Highness Sheikh Mohamed bin Zayed Al Nahyan, Crown Prince of Abu Dhabi and Deputy Supreme Commander of the UAE Armed Forces, the Abu Dhabi Department of Education and Knowledge (ADEK) has announced  the launch of the 9th edition of the Abu Dhabi Science Festival (ADSF), to be held at Al Bahar, Abu Dhabi Corniche, Al Jahili Park in the Al Ain Region, and City Mall at the Al Dhafra Region, from 31st January to 9th February 2019, as part of UAE Innovation Month.

During UAE Innovation Month, ADEK will coordinate with governmental entities to promote a spirit of work, innovation, and excellence, in addition to presenting a series of strategic initiatives for the public and private sectors, academics and innovators in coordination with the Mohammed bin Rashid Centre for Government Innovation at the Office of the Prime Minister. The announcement came during a press conference held at ADEK’s headquarters in the presence of a number of public sector officials.

Dr Al Nuaimi said, “The Abu Dhabi Science Festival is a strategic initiative planned by ADEK which correlates with Abu Dhabi’s vision, the National Innovation Strategy of the UAE, and the UAE Centennial 2071. Through our involvement with the Festival, we have managed to attract and educate youth from across the MENA region as part of our efforts to position the UAE as one of the world’s most innovative nations.”

These initiatives will also contribute to enhancing student skills and creativity while encouraging the young generation to participate in innovative projects and ideas.”

H.E. added, “The UAE continues its pioneering global move towards innovation, offering initiatives that motivate the community members to innovate and move steadily towards a prosperous future, full of progress and success for future generations.”

Mr Adel Ahmed Albuainain, Chief Executive Officer, Dolphin Energy Limited, sponsor of ADSF, said: “We are proud to be associated with ADSF, a truly world-class event, whose vision is to inspire, nurture and develop a new generation of scientists, engineers, mathematicians and innovators. In the eight years of

our involvement, we have played host to many young visitors and witnessed first-hand how they have been intrigued and excited by STEM. We are thrilled to continue our support and look forward to another great event.”

ADEK will provide a range of initiatives and activities that stimulate innovation in all areas and provide a platform to showcase innovative projects in line with the vision and plan of Abu Dhabi and the UAE Centennial 2071.

Mr Salem Al Shamsi, Acting Knowledge Management and Education Analytic Director at ADEK, said, “I commend the efforts made by our wise leaders to promote innovation and excellence. We are happy to open the UAE Innovation Month with the Abu Dhabi Science Festival, one of the biggest annual festivals in the Middle East, with its interactive and educational activities for all the family. It also contributes to promoting the spirit of discovery and innovation among future generations.”

He continued, “ADEK organizes innovative strategic initiatives such as the ADSF, Innovator 2019 and Lema? which all contribute to fostering innovation, knowledge and learning in Abu Dhabi in different areas, creating a healthy environment that fosters creativity and innovation.”

“Through the UAE Innovation Month and the ADSF, we build creative and innovative future generations to lead the way towards a successful future,” he concluded.

Engineer Sanad Humaid, official spokesperson of the ADSF 2019 for ADEK, said, “I would like to extend my gratitude to the UAE leadership, for their continuous support and in providing all the factors that lead to the success of ADEK’s initiatives which contribute to preparing future generations, while focusing on using modern technology, science, engineering, arts and mathematics in the process of enhancing education.”

Mr Humaid continued, “This 9th edition of the ADSF is a continuation of the successes of the previous eight editions. It reflects the efforts invested to build a generation that will contribute to the success of the UAE’s innovative scientific and educational future.

“UAE Innovation Month is one of the most important national events on the UAE government’s calendar. The UAE has maintained its top position in the Global Innovation Index (GII), among all Arab countries, according to the latest official data. The UAE ranked number one in the Arab

World and 38th globally, and 24th in the innovation input pillar. In addition, the nation also demonstrated an increase in its innovation output pillar, rising from 56th in 2017 to 54th in 2018,” he explained.

and called the public to access the UAE Innovation Month website to learn more about the innovative projects lined up.

On the other hand, 200 young minds will exchange and share ideas, inventions and creative projects at the Innovator 2019. Participants will be evaluated by a judging panel according to quality, originality, creativity, depth of interaction and their impact on society and the top six projects will be awarded by ADEK.