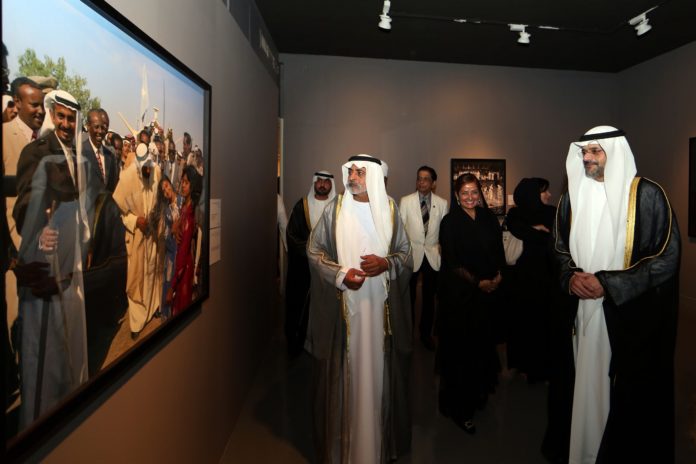 Exhibition honours the father of photojournalism in the Middle East: Noor Ali Rashid

The exhibition, which is on view from October 22-December 6, 2014 is held in collaboration between Sharjah Museums Department and The Noor Ali Rashid Archives, honours the prolific photography practice of the late Noor Ali Rashid (1929-2010), a photographer widely regarded as the father of photojournalism in the Middle East. The opening drew a vibrant and cultured crowd of artists, photographers, students, and families, all of whom came to honour the late photographer.

The Lasting Impressions series was conceived in 2010 as a platform to showcase the works and recognise remarkable artists from the UAE and the wider region, who over the span of their lifelong practices, have influenced the landscape of Arab art and left behind a moving legacy.

Over the course of his six decades as a photographer, including years serving as royal photographer to Sheikh Zayed and all 7 emirates, Noor Ali Rashid amassed a portfolio of more than 1 million images that documented everyday scenes and extraordinary historic events in the country’s history.

The exhibition has been installed in three thematic sections to showcase the breadth of the photographer’s extraordinary career. Life As It Was nostalgically depicts a slow paced way of life in the 1960’s markets, in the desert, and even on the water.

Building of a Nation documents the formative years of the UAE, from the Trucial States years through the Federation era, illuminating the country’s first achievements and landmark events. Finally, the third section, A Glimpse of the World, displays never before viewed photographs from Noor Ali Rashid’s international expeditions to some 35 countries, encompassing visits with many world leaders and notable celebrities.

Remarking upon this important occasion commemorating her father, Shamsa Noor Ali Rashid said, “Witnessing the opening of Lasting Impressions is truly a momentous occasion that deeply honours my father’s name. He expressed great desire that his work be presented to the public, and this exhibition celebrates more than half a decade’s efforts to preserve and catalogue his images and make that dream come to pass.”

Manal Ataya, Director General of Sharjah Museums Department said, “The UAE community looks forward to the opening of Lasting Impressions 2014 edition, which presents Noor Ali Rashid’s poignant photographs which will give unparalleled glimpses into the rich history of the UAE. The story of his inspirational life presented here is a gift to us all. ”